Express fast bowler Kemar Roach has been ruled out of the remainder of the ongoing West Indies Tour of England because of a shin injury. Roach will fly back to his home country Barbados to begin his injury rehabilitation.

Express fast bowler Kemar Roach has been ruled out of the remainder of the ongoing West Indies Tour of England because of a shin injury. Roach will fly back to his home country Barbados to begin his injury rehabilitation.

Roach has been regarded as one of the fastest bowlers in the world. The 23-year-old has so far played 19 Tests taking 70 wickets and 41 ODIs for 67 wickets which indicate that he is a potential strike bowler. The young fast bowler has made quite a few world class batsmen hop for his pace. It appears that Kemar Roach has been hit by a repetitive stress injury with a lot of pressure being put on his shin while attempting to hurl the ball at hostile speeds.

This is a big blow for the West Indies having already surrendered the 3-Test Series 0-2. With Roach out, West Indies would be replacing him with either Fidel Edwards or Tino Best in the playing XI for the Third and Final Test at Edgbaston. 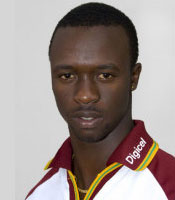 According to the West Indies Cricket Board website, the team physio CJ Clark has been quoted as “Kemar has been carrying this soreness for the last two matches, and in view of our upcoming schedule, we would like him to have the time to recover and prevent the onset of more serious injury,” said Clark.

“It is always important to balance workload with the body’s ability to repair, and I think it judicious to protect Kemar at this time.”

The West Indies Coach Otis Gibson according to the WICB site has expressed that it’s a major blow for his side to lose Kemar Roach but the decision to fly him back home was taken in the best interest of the fast bowler. This is now the second injury blow for the West Indies on this tour of England with debutant Shannon Gabriel pulling off after the Lord’s Test and now the case of Kemar Roach.