Sent in to bat by the West Indies, and sitting comfortably at 151/3 at tea, New Zealand recklessly crumbled to 260 all out. The hosts then played out the required five overs to be 11 for no loss at stumps.

Sent in to bat by the West Indies, and sitting comfortably at 151/3 at tea, New Zealand recklessly crumbled to 260 all out. The hosts then played out the required five overs to be 11 for no loss at stumps.

The West Indies would have been content with their day’s work, though captain Darren Sammy might have been second-guessing his decision at the toss when Ross Taylor and Martin Guptill were putting together a 103-run partnership for the third wicket.

The visitors, on the other hand, would have felt like they surrendered a good position at tea with some thoughtless batting and careless running.

Again it was Martin Guptill who led the way with the bat for his country, scoring a solid 71 before he was beaten by a spectacular Tino Best pick-up-and-throw while attempting a quick single. His captain, Ross Taylor, was in spanking form, scoring an attractive 60 when he tried, not for the first time, to cut a delivery that was too close to him and he edged a catch through to the wicketkeeper. 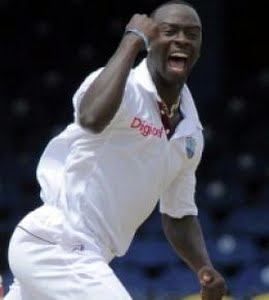 Overnight rain meant that there was some moisture in the track, which the West Indies sought to exploit by bowling first. Both Kemar Roach and Tino Best--who replaced the injured Ravi Rampaul--found early movement off the seam, which they utilized to make life difficult for Guptill and new opener BJ Watling. Fortune smiled at the batsmen at first, with a few deliveries just managing to avoid tentatively offered bats, or falling short of the slips when they did manage to kiss the edge, but the West Indies did not have to wait long for its first wicket.

Bowling his third over, Roach got one to move slightly away from Watling and had him caught at slip, though the West Indies was lucky the delivery was not adjudged to be a no-ball. The review showed that the pacer might have had a few millimeters behind the line upon landing, but even that was in doubt.

No such controversy surrounded the next wicket. Next over, Best, steaming in from the beginning, bowled a beauty that pitched on off-stump and held its line and McCallum could do nothing but feather it through to the keeper. It was a delivery that would have defeated most other batsmen. He almost made it two wickets in two deliveries when Taylor gloved a 90 mph short ball between two fieldsmen in the gully region, neither of whom made a great enough attempt to pull off a catch.

Straining every sinew to propel every delivery as fast as he can, the Barbadian was clearly causing some bother with his pace, so it came as a surprise when his captain removed him from the attack after just four overs. Sammy took over from Best, while Narine replaced Roach the over before the drinks break, and though there was a hint of turn and some bounce, it was clear the pressure had been eased.

Guptill and Taylor, New Zealand’s best batsmen this series, then began the task of repairing the early damage done by the opening bowlers. Though batting solidly, they still had time to unfurl some pleasant strokes. One effortless lofted drive by Guptill sent a Sammy delivery back over the bowler’s head for six, while his captain made sure he didn’t miss out on anything short outside off. By lunch both batsmen had passed 30 and seemed well set.

After the break and a 20-minute rain delay, they resumed with an even more positive outlook. Guptill soon hit Narine for another six, and Taylor collected five more boundaries to race to 60, when he committed an error in judgment against a quick Best delivery.

The talented Kane Williamson came in and played well, though he only managed to get to the tea break because of Deonarine’s failure to collect a return catch when he was 17.

But then the wheels came off.

He had only allowed himself five more runs when he reached way outside off to drive a well tossed up delivery from the same bowler and edged to Sammy at slip. Next over, Roach, always dangerous despite his no-ball troubles, straightened one that Brownlie pushed at without moving his feet and was caught behind.The score was then 170/6 and it required some lusty blows from the tailenders to carry the visitors to their eventual 260, with Roach collecting four wickets.

The West Indies bowled reasonably well throughout, but the damage to the tourist’s batting was mostly self-inflicted. Playing in front of his adoring countrymen, Chris Gayle will want to put on a show on the second day. If luck runs his way, New Zealand will be in for a long day.