Lord’s it is then that will officially decide which is the best team in the world. South Africa only need to secure a draw to claim the crown whereas England will have to find a way to upset the Proteas if they are to retain the number one ranking. In short, there will be everything to play for, for both teams at Lord’s.

Lord’s it is then that will officially decide which is the best team in the world. South Africa only need to secure a draw to claim the crown whereas England will have to find a way to upset the Proteas if they are to retain the number one ranking. In short, there will be everything to play for, for both teams at Lord’s. South Africa would without doubt go in as favourites considering their present form and confidence, but England too will be buoyed by the fighting effort they put up at Headingley.

Often in the past, the Proteas have come close to being number one in the five-day format, but have faltered before reaching the pinnacle. This, however, would be their best chance to prove they are the best in the world for a number of reasons. First and foremost, they possess the most balanced Test side in world cricket today, almost on par with the one Aussies had at their peak. Also, England would find it tough to overcome all the distractions surrounding Kevin Pietersen so close to the Lord’s Test. The home team players may maintain that Pietersen’s absence wouldn’t make a big difference in their endeavour to win. Deep down in the hearts though they know the truth. 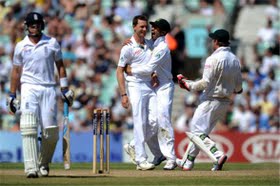 England will not only have to overcome the unruly Pietersen episode, but also a highly confident South African line-up. Such is the amount of faith Graeme Smith has in his men, the skipper willing declared in the second innings at Headingley when their batting was struggling, to ensure that England do not gain an further advantage by bruising out the tailenders. The sporting declaration did give England an outside chance of squaring the series, but South Africa had ample weapons in their bowling armoury to keep England at bay.

AlthoughSouth Africa’s batting underperformed at Headingley, they would be confident of putting up a better show at the mecca of cricket. Even in the drawn second Test, they had a major positive in the form of Alviro Petersen’s marathon ton, which was chiefly responsible for the visitors putting a respectable total on the board in the first innings. Petersen was the only batsman whose place in the eleven was under a cloud, and with him also proving his credentials, South Africa would have one headache less going into what could be a historic Test for them.

As for the rest, even though they failed at Headingley, the players have loads of experience to come back strongly at Lord’s. In Smith, Amla, de Villiers and Kallis they have four of best batsmen in world cricket. And if they cannot combine to help South Africa build a healthy total, the Proteas don’t deserve to be number one. There are still a couple of worries in the bowling department. Vernon Philander hasn’t found his groove yet and Morne Morkel remains erratic. Irrespective of all this, South Africa won’t get a better chance to become the best in Tests.