South Africa in a must win situation to draw the Series

South Africa find themselves under pressure going into the fifth and final ODI at Trent Bridge in Nottingham today. They simply have to win this match to draw the 5-match ODI Series 2-2.

South Africa find themselves under pressure going into the fifth and final ODI at Trent Bridge in Nottingham today. They simply have to win this match to draw the 5-match ODI Series 2-2.

England, who have been the underdogs in this series, looked like a pretty weak outfit after watching the South African domination in the second ODI. The first match at Cardiff was washed out without a result and in the second ODI at Southampton saw Hashim Amla score a superb 150 to lead the Proteas to a crushing victory.

Going into the third ODI, England having already rested their strike bowler Stuart Broad had to miss the services of Graeme Swann because of the latter’s elbow problems. It was a huge blow for England but Swann’s replacement – James Tredwell did a commendable job in the third and fourth ODIs. England won both the matches after restricting the Proteas to modest totals. 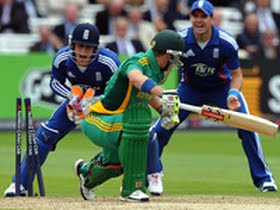 Now England are sitting nicely with a 2-1 lead which means that there is no pressure of a series defeat for Alastair Cook’s men. It will be a great boost though if England can win today’s final ODI to win the Series 3-1. For that, the English bowlers should once again keep the likes of Hashim Amla, Graeme Smith and Skipper AB de Villiers under a check.