Pakistan’s form in the first ODI at Guyana couldn’t really be judged since it was a simple case of one man -- Shahid Afridi --demolishing the opposition.

Pakistan’s form in the first ODI at Guyana couldn’t really be judged since it was a simple case of one man -- Shahid Afridi --demolishing the opposition. On Tuesday, we got a better idea of how good they are in the present scenario, and the answer isn’t too encouraging. They began well with the ball, but allowed the Windies to get away, with some pedestrian bowling, poor fielding and unacceptable indiscipline – conceding as many as 38 extras, which was actually the third highest score in the Windies innings. With the bat as well, Pakistan were erratic right from the start, and with the pitch not as easy to play on, they succumbed meekly. 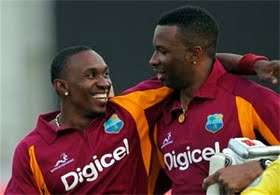 In the context of the game, the partnership between Dwayne Bravo and Kieron Pollard was significant. The innings was going nowhere when the duo joined hands. There wasn’t much hope for West Indies either since both skipper Bravo and Pollard had been short on runs. But, credit to them for sticking it out and forging a partnership that gave them what eventually was a match winning total. While Bravo anchored the innings till the end, Pollard hit the big shots at will and accelerated the scoring just when needed.

West Indies were as poor as Pakistan in the field, but the Pakistan batsmen were equally fragile on a surface where gutsy play was the order of the day. Ahmed Shehzad, Mohammad Hafeez and Azad Shafiq, all failed to show the required patience needed. For a change even skipper Misbah-Ul-Haq gave his wicket away, but that can be put down to the frustration of his batsmen not supporting him in spite of him anchoring the innings. Shahid Afridi tried to go boom boom again, but this was not his day.

Under the circumstances, Nasir Jamshed played a very mature knock, holding the innings together in Misbah style. However, just like his skipper, he failed to get the desired support. By the time Umar Akmal came up with his blistering half-century, it was the same old case of too little too late for Pakistan. While Pakistan were poor with the bat, Sunil Narine was equally good with the ball. The spinner, who looked flat against Afridi the other day, was back in his elements on Tuesday. Pakistan were clueless against him, as Hafeez and Afridi fell to his guile. All the other bowlers supported him throughout, chipping in with some wickets.

The 1-1 score line after two games is a fair indication of how well-matched the two sides are. Being the two most inconsistent sides in the world, a close contest can be expected in the coming matches as well. The big players from both sides haven’t delivered yet, especially the batsmen. As such, the series might well be decided by how soon they roar back to form. Else, it will be up to the youngsters in the team to put their side ahead. Whatever the case, sounds a fascinating prospect.