Veteran Australian pacer Peter Siddle has announced his retirement from international cricket at 35. Siddle was picked in the squad for the Test series against New Zealand

Veteran Australian pacer Peter Siddle has announced his retirement from international cricket at 35. Siddle was picked in the squad for the Test series against New Zealand. However, he was not picked for the Boxing Day Test at Melbourne and told his teammates of his decision on Sunday.

Siddle featured in 67 Tests for Australia and claimed 221 wickets at an average of 30.66. The pace bowler picked up eight five-wicket hauls in his career spanning 11 years. Siddle also claimed 20 wickets in 17 ODIs, and three scalps in two T20Is. The Oval Test against England in Ashes 2019 turned out to be his last Test.

"Just being able to play, to walk out, wear the baggy green -- I'd watched guys like Punter (Ricky Ponting), Steve Waugh, guys like that wear it, represent Australia. Every time I stepped out was amazing, I don't think I could pick one special one. At the end of the day, to play one is amazing, to end up playing what I did is truly special,” Siddle said while calling it a day. 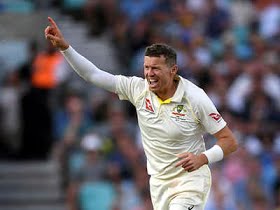 The Victoria-born cricketer made his Test debut against India at Mohali back in 2008. The legendary Sachin Tendulkar was his first Test victim, whom he dismissed for 88. One of Siddle's most memorable moments was in 2010 when he picked up a birthday hat-trick against England at the Gabba. Siddle sent back Alastair Cook, Matt Prior, and Stuart Broad, ending with six wickets in the innings.

Siddle finished the 2010 Ashes as Australia's second-highest wicket-taker with 14 wickets at an average of 34.57. Recalled to the side for the 2019 Ashes, Siddle claimed seven wickets in three Tests. He also made a surprise comeback to the ODI team earlier this year. Siddle will continue to play for Adelaide Strikers in the Big Bash League as well as Victoria in the Sheffield Shield.

Tributes pour in for Siddle

“Sids (Siddle) has been the heart and soul of the team for a long time. He has a massive heart and is a fantastic bowler. He'll be very much missed around the group. He's been unbelievably good for our younger fast bowlers over the last 18 months and been a great support for me during that time, as well." -- Australia Test skipper Tim Paine

"The year after I retired from playing, Matty Hayden and Ricky Ponting were raving about this guy called Peter Siddle. If it came from them, you knew it was right and so it proved throughout his brilliant international career. He is an unbelievable bloke and an extremely good cricketer. He is everything about what a team player is. He has given his heart and soul to the Australian team and the game of cricket." -- Australia head coach Justin Langer