Traditionally, India are poor starters, especially while playing away from home. The Boxing Day Test of 2007 was a prime example of this fact. Batting first, Australia put up a competitive 343 on board courtesy yet another ton from Matthew Hayden and a half-century from Phil Jaques.

The 2007-08 series held Down Under has been the most volatile of all contests between the two sides since the inauguration of the trophy. The series was marred by unimaginable umpiring blunders, personal animosity and plenty of bickering over the lack of sportsmanship being shown. In all the melee, the end result seemed pretty much redundant. For the record, Australia trounced India 2-1.

Traditionally, India are poor starters, especially while playing away from home. The Boxing Day Test of 2007 was a prime example of this fact. Batting first, Australia put up a competitive 343 on board courtesy yet another ton from Matthew Hayden and a half-century from Phil Jaques. If India managed to keep the hosts under 400, it was due to the efforts of Anil Kumble and Zaheer Khan, who combined to scalp nine wickets.

India’s reply was pedestrian at best. Sachin Tendulkar made his mandatory half-century and Sourav Ganguly chipped in with 43 as the visitors were rolled over for 196. Brett Lee and Stuart Clark destroyed the innings, grabbing eight wickets. In their second essay, Australia scored at nearly four runs per over, and raced to 351 in 88 overs, setting India a target of 499. The kind of form they were in, it wasn’t surprising that the Indians folded up for 161. 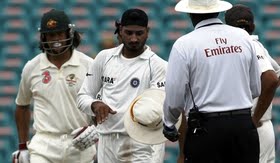 This was a match that is better erased from memory if you are an Indian. India got the wrong end of the stick when it came to plenty of umpiring blunders. Most of them went in favour of Andrew Symonds, who flourished to make an unbeaten 162 as Australia ended their first innings on 463. The innings also saw half-centuries from Brad Hogg and Brett Lee. India’s reply was inspired. Tendulkar made a flawless unbeaten century and Laxman came up with another sublime ton as India responded with 532. Thanks to a few more umpiring errors in Australia’s second innings, Mike Hussey managed to pinch a hundred. When India batted, more bad decisions went against them. Dravid and Ganguly got debatable decisions. Even so, India should have done better than losing their last three wickets in five balls. It was during this Test that Harbhajan and Symonds were involved in the infamous monkeygate scandal.

After the torturous time at Sydney, India recovered in majestic fashion at Perth to keep their hopes of squaring the series alive. Batting first India registered a competitive 330 courtesy Dravid’s 93 and Tendulkar’s 71. India then bowled superbly to keep Australia to 212. RP Singh was the surprise hero for India with four wickets even as all the others chipped in. Symonds was again a thorn in the Indian side, making 66. India’s second innings was built around a classy 79 from Laxman, which helped India set Australia a tough target of 413. They managed to reach 340, but a 72-run win was enough to make the Indians jubilant.

This match was all about centuries. India batted first and made 526 courtesy Tendulkar’s century and half-centuries from four others. Australia replied with 563; Hayden, Ponting and Clarke helping themselves to hundreds. Sehwag then made an uncharacteristic 151 in India’s second innings to hold India together, and secure a hard-earned draw for the side.