Kohli: I’ll dive six times in an over if needed

Having smashed two back-to-back hundreds, and creating a new record for fastest to 10,000 runs, Virat Kohli has asserted tha

Having smashed two back-to-back hundreds, and creating a new record for fastest to 10,000 runs, Virat Kohli has asserted that he is not taking his place in the team for granted.

"It's a great honour for me to represent my country and even after playing 10 years, I don't feel like I am entitled for anything here. You still have to work hard for every run that you score at the international level," Kohli was quoted as telling BCCI's official website. 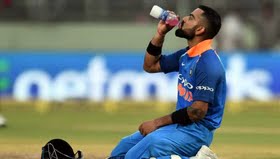 He further stated, "There are many people who want this very badly. So when you are in that same position yourself, you should have that same hunger and never take things for granted, never take it easy at any stage."

"Because that's my duty and that's why I am selected to play for my country. That's part of my job. It's not doing anyone a favour,” Kohli further explained.