MSK Prasad, the chairman of selectors, has responded to the controversy over Karun Nair

MSK Prasad, the chairman of selectors, has responded to the controversy over Karun Nair’s sacking without getting a single game in England.

"I personally spoke to Karun soon after the selection of the Test Team against the West Indies and also told the ways to make a comeback. The selection committee is very clear with regard to the communication process," Prasad was quoted as saying in PTI on Monday. 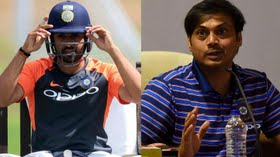 According to reports, Nair, in an interview stated, that the selectors have not communicated with him. Prasad, however, said otherwise.

"Communication has always been the strong point of this committee. It's really tough to inform any unpleasant news to any player. You need to have valid reasons to explain them about their exclusion though they may not agree with it," Prasad added.

Prasad even stated that Devang Gandhi had spoken to Nair in England. "Having said that we are very clear and candid in our communication process. My colleague Devang Gandhi spoke to Karun Nair at length in England to keep him motivated and wait for his opportunities," Prasad said.