CWC 2015 Pak: Not many had given Pakistan a chance of progressing beyond the quarter-finals, and they did not. So, the end result wasn’t surprising. As always, Pakistan were up and down in the tournament, and one never knew what to expect from them.

Not many had given Pakistan a chance of progressing beyond the quarter-finals, and they did not. So, the end result wasn’t surprising. As always, Pakistan were up and down in the tournament, and one never knew what to expect from them. This means they were always a threat for opponents until they were eliminated. After a poor start, they raised hopes of a 1992-like turnaround mid-way through the tournament. But, this team was nowhere near as talented or mentally strong as Imran Khan’s bunch. In the end, Pakistan’s overall performance was reflective of their state of cricket – unsure, out of sync. 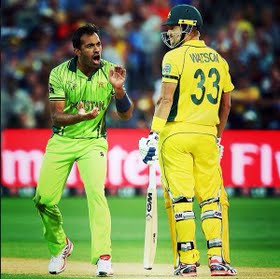 Pakistan began their tournament on an inauspicious note, going down to India for the sixth time in the World Cup with a below par performance. Things got worse for them when they lost to an equally unpredictable West Indies, who had earlier been defeated by Ireland. The loss against the Windies set Pakistan back in a big way, and the team was deflated after somehow managing to stay afloat against Zimbabwe. The clean victory against UAE gave Pakistan some sense of confidence, but it was the brilliant come from behind win against Proteas that reignited Pakistan’s World Cup campaign.

As they headed into the quarters, Australia were always the favourites. Pakistan’s bowling had fallen into place, but it was always going to be their batting which was going to trouble them, which is exactly what happened. Sarfraz Ahmed’s induction late in the tournament had given them better balance, but the continued failure of Ahmed Shehzad at the top of the order proved to be a big impediment. Shehzad was not the only one to struggle though. Umar Akmal continued to embarrass, raising question marks over his talent. Haris Sohail and Sohaib Maqsood got starts, but were least interested is taking up a greater challenge.

Like with Sri Lanka, this was the last one-day tournament for two of Pakistan’s oldies as well. Skipper Misbah-ul-Haq once again held the team together with his batting, but his impact was reduced due to the lack of support from the others. Shahid Afridi would have been hoping to go out on a blaze of glory. But, he hardly made his presence felt. His 23 against Australia matched his career average, and his strike rate in the innings was on par with what is expected of him. Perhaps, Afridi was satisfied with it. His bowling too was far from effective unlike previous editions.

If Pakistan will look back at the 2015 World Cup some kind of fondness, it will be thanks to their pace bowlers. The way then combined to outwit South Africa’s batsmen in the league game was brilliant. Sadly, Mohammad Irfan was ruled out soon after, and that hurt Pakistan’s chances. Still, Wahaz Riaz, Sohail Khan and Rahat Ali stood up and made an impression. Riaz’s spell against Shane Watson against Australia was extraordinary although it came in a losing cause. Also, Rahat would unfortunately be remembered for the costly drop. In the end, Pakistan, in a sense, actually lived up to expectations.