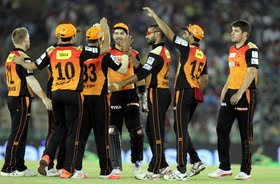 Chasing the below par score of 151, Kings XI Punjab made the mess of the chase by losing wickets at regular interval. Virendra Shewag was rested today and Manan Vohar was given first chance in this season, but even that couldn’t change the KXIP’s fortunes. Vohra(5) was bowled by Boult, trying to drive the ball through covers but he only managed to drag the wide delivery on his stumps. Soon after that, Shaun Marsh(1) was shown the doors by Bhuvneshwar Kumar. George Bailey came in and played some beautiful shots but failed to capitalize on his start when he was trying to chip the bowl over mid-off but was hold on at the edge of the circle. Murali Vijay(12) was settled but couldn’t score the run freely as it took him 16 balls to get 12 runs. A mix-up between Vijay and Miller led the downfall of Vijay when Miller called him for two and sent him back after just one. Miller(15) didn’t read the googly of Karn Sharma and found Boult at long off. Wriddhiman Saha(42) and Axar Patel(17) led the fought back for the kings. Saha was lucky to get two chances when first Bopara and then Boult dropped him. Saha and Axar accelerated the scoring rate and tried to get closer to the target. With Punjab needing 35 runs in three overs with 5 wickets left, it was anybody game then. But Trent Boult came in to bowl the 18th over of the inning and he was too good for both Axar and Saha. First he bowled Axar with a deadly Yorker and bowled a well-directed bouncer to get rid of Saha. With all recognized batmen went in hut, the game was almost over for the Kings.

Earlier Kings XI Punjab captain George Bailey won the toss and invited Sunrisers Hyderabad to bat first. Mitchell Johnson gave the breakthrough when he dismissed Shikhar Dhawan in his first over. David Warner was in good touch as he punished all the King’s bowlers. The shots he played against his Australian teammate were to see for everyone. Warner(58) scored his fourth fifty in this season and he is now only six runs behind Ajinkya Rahane to earn the orange cap. After Warner’s dismissal, no other batsmen got any significant score.

With three win in seven games, Sunrisers Hyderabad are now at the fifth and Kings XI Punjab have slipped at the bottom of the points table.

Player of the Match: Trent Boult