Lasith Malinga, who recently retired from ODI cricket, proved that he can still be lethal at the T20 level, by claiming a hat-trick and making it four wickets in four balls to destroy New Zealand

Lasith Malinga, who recently retired from ODI cricket, proved that he can still be lethal at the T20 level, by claiming a hat-trick and making it four wickets in four balls to destroy New Zealand in the third T20 at Pallekele.

Chasing a meagre 126 for victory, the Kiwis crumbled to 88 as Malinga finished with sensational figures of 5 for 6. En route to his brilliant performance, Malinga also became the first bowler to claim 100 T20 wickets. He overtook Shahid Afridi, who has claimed 97 wickets in his T20 over.

The slinger began mission destruction by cleaning up Colin Munro for 12. The veteran then went on to add the scalps of Hamish Rutherford, Colin de Grandhomme and Ross Taylor to complete a hat-trick. 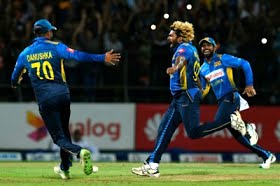 It may be recalled that Malinga had claimed four wickets in four balls earlier in his career as well, way back in a 2007 World Cup game against South Africa. On Friday, he added the wicket of Tim Seifert to complete a five-wicket haul, and lead his team to a consolation victory.

While Afridi has retired, Bangladesh all-rounder Shakib Al Hasan, with 88 wickets, poses a challenge to Malinga's record of most T20 wickets.

Looking back at the game, Sri Lanka managed only 125 for 8 batting first. Opener Danushka Gunathilaka top-scored with 30 while Niroshan Dickwella contributed 24. For the Kiwis, Mitchell Santner and Todd Astle claimed three wickets each.

At the halfway stage, the visitors would have been confident of securing a 3-0 whitewash, but like he has often done over the years, Malinga blew away the opponents' hopes with a superb display of fast bowling.