Mohammed Shami reveals what he would do to dismiss Virat Kohli

Indian fast bowler Mohammed Shami on Friday stated that even the best batsmen in the business have flaws, and that he has his own plans when it comes to dismissing skipper Virat Kohli. Shami added that he is well aware of his captain’s strengths and weaknesses having spent so much time with him.

“There are a lot of things that come with playing and spending quality time with another player. You not only come to know of his strengths, but also of his weaknesses. As a bowler, you need to keep working on the weak zones,” Shami was quoted as telling news agency IANS. 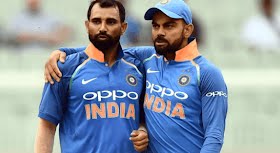 The pace bowler, who has 180 Test and 144 ODI victims to his credit, explained how one needs to focus on a particular area to trouble the batsmen. “There is no denying the fact that he (Kohli) is the best in the business, but even the best has those little flaws which you can work on. You just need to pick on one factor and focus on that,” he further said.

“Say for example, which has been the area that has troubled a batsman in recent times? You then work on that. I have dismissed him quite a few times (IPL) and without getting into much details, I will say you have to just work on the weak zone,” Shami went on to add.

The 29-year-old also praised captain Kohli for backing his players to the hilt. According to Shami, Kohli gives them the freedom to do what they are confident about. “I think the results bear testimony to the fact that Virat backs us to the core. Also, it is very important at the international level to have a captain who knows your strengths and weaknesses and also backs you. This in turn helps you raise your game,” Shami further said in the IANS report.

In the interaction, Shami also revealed that reverse swing did not come to him naturally, and that he mastered the art as he played more and more international cricket. “As you keep playing, you learn a lot of things. It is all about following one process after the other. So, when you have learnt one trick and mastered it, you then move to the next one and work on that. In the beginning, I didn’t have much idea about reverse swing.

“But slowly I came to understand what the process of reverse swing is all about and how it can be an integral part of a pace bowler’s armoury. Then I started working on it because you are not born with it. I had to work hard and to be honest, you have to work hard for everything that you wish to achieve in life,” Shami stated.