There is something about India that bring out the best in Steven Smith. The Aussie captain looks fluent during most of his visits to the crease, but pit him against the Indians, and he becomes a modern-day Don Bradman.

There is something about India that bring out the best in Steven Smith. The Aussie captain looks fluent during most of his visits to the crease, but pit him against the Indians, and he becomes a modern-day Don Bradman. The Indian bowlers were clueless against him in the Tests last year, allowed him to ease to a hundred in the World Cup semi-finals. In the first match since that big clash, nothing changed. Australia were not chasing a small target. But, Smith with an smashing 149, aided by a century from George Bailey, who himself has a great record against India, ensured Australia gunned down 310 without actually breaking too much of a sweat. 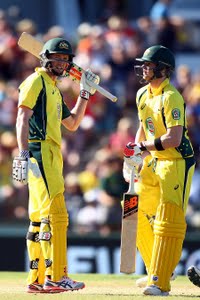 The match did go into the last over, when debutant Barinder Sran claimed his third wicket by sending back Smith one short of 150. But, Australia were forever in control, winning the contest by five wickets in the end. Defending 310, India began well with Sran sending back both the openers in impressive fashion. What followed though would leave India extremely disheartened. Smith and Bailey joined forces and gunned down a seeming tough target without much trouble. Coming in at a tricky 21 for 2, the duo added a massive 242 runs for the third wicket before they were separated. By the time that happened, the match was out of India's grasp.
On a batting beauty at the WACA, Smith and Bailey were completely at home both against India's pacers as well as spinners. The rotated the strike at a consistent pace, and got boundaries at frequent intervals to see to it that the run rate was always under control. There were rarely any deliveries that troubled the duo. Bailey eased to his hundred, and eventually fell for 112, holing out to long off against Ravinchandran Ashwin. Bailey hit seven fours and two sixes in his knock. India needed until the last over to dismiss Smith. Sran foxed him with a slower ball, and Virat Kohli held the catch at short cover. It was way too late.
The day began on a much more optimistic note for India as Rohit Sharma carried on his splendid form against Australia, en route to a sparkling 171 not out. He was well supported by Kohli, who made a mature 91, rather surprisingly his first fifty against Australia in Australia. Kohli coming good was only a matter of time though. The duo of Rohit and Kohli aided India overcoming the early loss of Shikhar Dhawan after a brisk start, the left-hander hooking Josh Hazelwood to long leg. Rohit and Kohli sizzled in a 207-run second wicket stand before the latter perished looking for the big ones. Rohit stayed till the end, and finished with seven sixes as India crossed 300.
In spite of having a big score on the board, India needed a good start to further enhance their confidence. The same was provided by debutant Sran, who was handed the new ball by skipper MS Dhoni. Aaron Finch was Sran's maiden international wicket as the Aussie opener mistimed a drive, and the bowler claimed a caught and bowled. There was further joy for Sran and India as David Warner was caught at mid-off. At 21 for 2, India had their noses in front. But, Bhuvneshwar Kumar and the spinners failed to make any impact. And, once Bailey and Smith got their eyes in, it was a canter.
-- By A Cricket Correspondent