England have won a Test Series in India after a long gap of 28 years. The Alastair Cook led team defeated India 2-1 following a draw in the dull Nagpur Test.

England have won a Test Series in India after a long gap of 28 years. The Alastair Cook led team defeated India 2-1 following a draw in the dull Nagpur Test. Ian Bell helped himself to an 18th Test century, he remained unbeaten on 116 (from 306 balls with 16 fours and a six) while debutant Joe Root collected 20* before the match was closed at 3:20 PM with 75 overs bowled for the day.

The Man of the Match award went to James Anderson for taking four wickets. Skipper Alastair Cook with three centuries got the Player of the Series award. 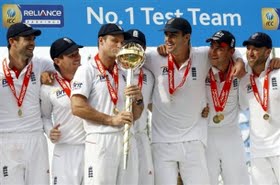 Tea on Day 5: The Nagpur Test as expect is petering out into a draw with England not keen on giving any batting to India. Against the run of play, India managed to take a wicket in the post lunch session when Ashwin got Jonathan Trott flicking him off an inside edge into the hands of legslip. It wasn’t before Trott had scored his series best of 143 (from 310 balls with 18 fours) and taking England past 300.

The final session should be of just the last rites with Ian Bell on 87* searching for his century. The match is likely to be called off after 15 overs in the final session.

Lunch on Day 5: England are all set to wrap up a series win of 2-1 with the fourth and final Test at Nagpur on the verge of being drawn. It was a dull lifeless session for Team India with the overnight pair of Trott and Bell giving them no chance at all to take their wickets. England have gone in to Lunch with an overall lead of 244 runs with a maximum of 59 overs left in the Test match for India to do the impossible.