Sri Lanka will look to seal the ongoing 5-match ODI Series tomorrow at Hambantota. With a lead of 2-0, Sri Lanka are one win away from capturing the series in the fourth ODI itself.

Sri Lanka will look to seal the ongoing 5-match ODI Series tomorrow at Hambantota. With a lead of 2-0, Sri Lanka are one win away from capturing the series in the fourth ODI itself.

The Lankans will be missing the services of opener Tillakaratne Dilshan, who scored a cracking century to help the hosts defeat New Zealand in the rain-affected Third ODI at Pallekele. Dilshan has been rested from the last two ODIs to be played at Hambantota because of a strained back. Sri Lanka would be hoping that the dashing batsman recovers on time to play in the first Test at Galle on the 17th. 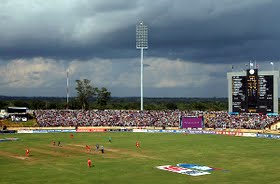 Chamara Kapugedara has been added to the Sri Lankan squad which otherwise remains the same for the last two ODIs. Young gun Dinesh Chandimal will take the place of Dilshan in the playing XI.

New Zealand haven’t played that badly in the series, it is just that the wet weather has been upsetting their rhythm. On Saturday, rain is forecast at Hambantota as well, so it could well be yet another curtailed game on offer between the Lankans and the Kiwis.