With the first match of the ODI series between Ireland and Afghanistan being washed out due to rain, the teams will hope for better fortune as they face each other in the second match of the series

With the first match of the ODI series between Ireland and Afghanistan being washed out due to rain, the teams will hope for better fortune as they face each other in the second match of the series at the Civil Service Cricket Club stadium in Belfast. The bad news for the teams is that there is heavy forecast of rain for Tuesday as well. There is a high possibility that the second clash is also washed out due to rain. That would be really sad, for Afghanistan and Ireland promises an interesting contest.

Ireland recently faced Sri Lanka, when the Asian nation had arrived on their gruelling tour of England. The Lankans were always expected to do well, and win with ease. However, what would have disappointed Ireland most is the fact that they failed to compete. Ever since making their entry into international cricket, they have prided themselves on competing against the bigger nations even in loses. However, Sri Lanka were all over them in the short two-match series. In fact, the wins against Ireland were the only causes of respite for Sri Lanka on an otherwise forgettable tour. 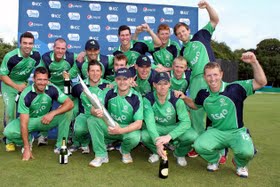 Against Sri Lanka, only a couple of players put their hands up. Skipper and opening batsman William Porterfield will again be among the keys. Then, of course, there is Kevin O’Brien, who can win matches on his own when it is his day. Gary Wilson and Paul Stirling are two other batsmen who have the experience to deliver under pressure. There are a few new faces in the team, in the absence of the experienced Niall O’Brien, who has been a stalwart for the team over the years. And so, Ireland will be hopeful that the likes of Andy McBrine and Tim Murtagh rise to the occasion.

Afghanistan, on the other hand, come into the series with a lot of confidence behind them. They have registered wins against Zimbabwe to prove their worth. To add to it, they even recently defeated Scotland in a two-match series, in which one game was washed out due to rain, again. Najibullah Zadran and Rahmat Shah impressed with the bat for Afghanistan in the opening game while Mohammad Shahzad made the big difference in the second match. Ireland will give them a tough fight, but Afghanistan will be confident of doing well surely.