The BCCI, on Thursday, announced the Indian team for the T20 series against South Africa, which begins from September 15.

The BCCI, on Thursday, announced the Indian team for the T20 series against South Africa, which begins from September 15.

The 15-member squad sees all-rounder Hardik Pandya returning to the team after being rested for the tour of West Indies. Pandya has had to share a lot of workload upto the World Cup and the rest should have helped him reenergise.

Pandya replaces Bhuvneshwar Kumar from the T20 squad that featured in West Indies. The rest of the team members retain their spot. The big news is that MS Dhoni has not been included yet again. Dhoni, who isn't in the West Indies either, is said to be vacationing in the United States after having served in the Territorial Army for 15 days. 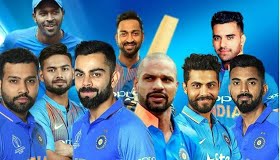 Interestingly, Jasprit Bumrah has also not been named in the eleven, and it seems that he has been rested. Notably, Kuldeep Yadav and Yuzvendra Chahal, who did not find a place in the T20 squad against West Indies following a poor World Cup, remain excluded.

Manish Pandey, who hasn't got much opportunities, keeps his place as do Krunal Pandya and the Chahar brothers -- Rahul and Deepak. Khaleel Ahmed and Navdeep Saini, who have been impressive in recent times, are likely to get more chances against South Africa.

The T20s will be followed by a three-match Test series in October.

Meanwhile, India take on West Indies in the second Test at Jamaica today having won the first Test by 318 runs.