A total of three T20 exhibition matches will be played during the tournament titled "Cricket All-Stars Series 2015". The two stalwarts will be captaining their respective sides, and the teams are named "Sachin's Blasters" and "Warne's Warriors" respectively.

The schedule for the much-awaited three-match exhibition series being organised jointly by Sachin Tendulkar and Shane Warne has been announced. The two stalwarts will be captaining their respective sides, and the teams are named "Sachin's Blasters" and "Warne's Warriors" respectively. A total of three T20 exhibition matches will be played during the tournament titled "Cricket All-Stars Series 2015".

The three matches will be played on November 7, November 11 and November 14. The first match will be played at New York's Citi Field, the second at Houston's Minute Maid Park and the third at Los Angeles' Dodger Stadium. 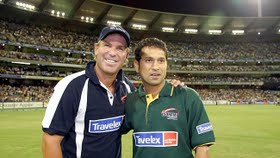 A number of retired international stars will feature in the exhibition games. While the first two matches will be day affairs, the third one at Dodger Stadium will be played under lights. The stadium is said to have a capacity of over 55,000. Expectedly are the three venues chosen to host the matches are baseball stadiums. As such drop-in pitches will be used for the matches.

While the tournament is unique in itself, this is not the first time international cricketers will be stepping on to an American field. Back in 2012, West Indies and New Zealand featured in two T20 matches at the Central Broward Regional Park in Lauderhill, Florida. Interestingly, the stadium, which has a capacity of 15,000 is the only ICC-ODI certified cricket stadium in the USA.

Apart from Tendulkar, the other Indians who will be part of the exhibition event are former captain Sourav Ganguly, VVS Laxman and pace bowler-turned-expert Ajit Agarkar. As for Warne, the former Aussie mates joining him are Ricky Ponting, Matthew Hayden, Glenn McGrath and Brad Haddin.

Reports suggest the likes of Anil Kumble, Andy Flower and Sanath Jayasuriya could also be part of the event, but there has been no confirmation about their participation.

The list of confirmed players, country-wise, are as follows: