England defeated India comprehensively by seven wickets in the first of the three match T20 series at Green Park, Kanpur. Putting India in after winning the toss, England restricted the hosts to 147 for 7.

England defeated India comprehensively by seven wickets in the first of the three match T20 series at Green Park, Kanpur. Putting India in after winning the toss, England restricted the hosts to 147 for 7. Moeen Ali claimed 2 for 21 while others including Tymal Mills picked up a wicket each as England enjoyed themselves. England captain Eoin Morgan and Joe Root then shone with the bat, making 51 and 46 not out respectively as the Green Park went silent. 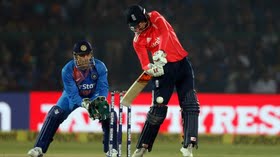 Indian captain Virat Kohli opened the innings along with KL Rahul, and added 34 for first wicket. Rahul again fell cheaply, making 8 before being sent back by Chris Jordan. Kohli followed next, for 29 from 26 balls. Wickets kept falling as Yuvraj Singh was sent back by Liam Plunkett for 12 from 13 balls, as India crumbled to 75 for 3. Suresh Raina, coming in at number three, hit 34 from 23 but was then bowled by Ben Stokes. Thanks to MS Dhoni, who was unbeaten on 36 from 27 balls, India got close to 150, but wickets kept falling at the other end.

In response, England got off to a flyer as openers Jason Roy and Sam Billings added 42 in 3,2 overs. Roy was bowled by Yuzvendra Chahal for 19 from 11. Billings went next also falling in the same mode, but not before having made 22 from 10. Morgan and Root then added 83 for the third wicket. Morgan crossed his fifty before being falling to debutant Parvez Rasool. Root remained unbeaten on 46. Ali was declared the man of the match for excellent figures of 2 for 21.