Kings XI Punjab looked like the winning side for the first 17 overs in the second innings as KL Rahul and Mayank Agarwal put on 115 for the opening stand, but lost wickets in a cluster at the end to fall short by 2 runs. Dinesh Karthik top scored for the Kolkata Knight Riders with a 29 ball 58.

KKR chose to bat first and had a very quiet start. Rahul Tripathi, hero from the last match, looked very fidgety for his 10 ball stay that yielded only 4 runs, and eventually Shami castled him. 4 balls later, there was some confusion between Gill and Rana as both of them found each other at the striker’s end, and Rana was run out as a result. Shami bowled his first three on the trot as only 25 runs came in the powerplay at the cost of 2 wickets.

Morgan came to bat at his natural position of number four, ironically for the first time this IPL. Gill focussed on rotating the strike, while Morgan tried for a boundary here and there. KKR were 60-2 at the end of 10 overs. Trying to hit a six off Bishnoi, Morgan found Maxwell and had to return to the pavilion as a total of 160 from that point looked a distant dream for KKR. Skipper DK came to bat and as usual, took his time to settle in. He didn’t waste too much time though to get into the act as he attacked Jordan and Shami in the 17th and 18th over respectively as he raced to a 22 ball fifty. Gill too helped himself to a hard fought fifty but was involved in yet another run out. Young Arshdeep Singh got rid of the danger man Russell cheaply and Jordan bowled a fine final over as KKR had to settle for 164-6, a target they would have been happy with at that stage given the start they had. 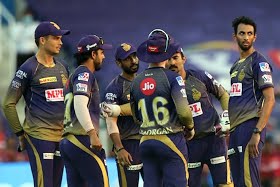 Punjab needed their openers to give them a solid start and KKR certainly helped them with that as skipper Rahul was dropped in the second over of the chase by Russell. Both the batsmen then put their head down and started to rotate the strike with a few calculated risks. Agarwal slammed 14 off Prasidh’s second over as Punjab were going at a decent rate of 7 runs per over. Rahul put a serious price on his wicket as Agarwal tried to find boundaries.

At the halfway stage, Punjab were on course with 76 runs on the board and no wickets lost. Cummins bowled out his four in the 13th as Rahul smoked two boundaries off him. After getting to a fifty, Agarwal holed out to Gill at deep midwicket, not before getting a fine fifty. Pooran came in at number three and struck three boundaries in no time as a win for Punjab seemed imminent.

With just 22 required off 18, Pooran lost his timber against Narine as KKR sniffed a chance. New batsmen Simran Singh ate three consecutive dots as Punjab started to feel the pressure. Prasidh Krishna first got Simran and the well set Rahul for 74 in the penultimate over as were were set for a thriller with 14 required off the final six deliveries. It was down to Maxwell vs Narine as 7 was required off the final ball, and Maxi smashed a four which fell inches short of us getting a super over, as Punjab lost by 2 runs.