Martin Guptill scored his 3rd ODI century to guide New Zealand to an easy 5-wicket win against England at Lord’s. New Zealand after a disciplined bowling show strangled England to a below par total of 227 for 9 on a good batting strip.

Martin Guptill scored his 3rd ODI century to guide New Zealand to an easy 5-wicket win against England at Lord’s. New Zealand after a disciplined bowling show strangled England to a below par total of 227 for 9 on a good batting strip in the opening ODI. England despite James Anderson taking two wickets off the first over couldn’t put the visitors under any sort of pressure in the run chase.

Anderson produced two lovely outswingers to have Luke Ronchi and Kane Williamson dismissed for ducks. The Kiwis from a tricky position 1 for 2 got back on track thanks to a 120-run stand between Guptill and Ross Taylor. The 3rd wicket stand was broken in the 26th over when Ross Taylor was caught behind off Anderson with an inside edge to a drive on the up.

England’s hopes of making further inroads were quashed by Grant Elliott (27 from 43 balls) who helped Guptill to add 47 runs for the 4th wicket. Elliott, who had survived an lbw off Dernbach early on by taking a successful review, was eventually bowled through the gate by a classical off break from Swann in the 38th over. New Zealand had enormous depth in their batting as Skipper Brendon McCullum walked in at no.6 with his side needing 60 more runs. McCullum didn’t last long though as he carved Dernbach into the hands of deep covers. 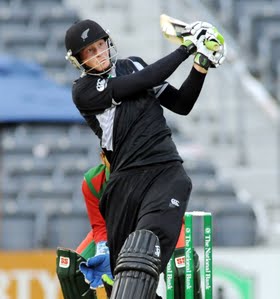 There was still no pressure on the Kiwis as they slipped to 185 for 5 in the 41st over with Guptill still hanging in there. Along with next man in – James Franklin (16*), Guptill wrapped up the match in the 47th over. The 26-year-old Guptill’s 103* came in 123 balls with 8 fours and 4 sixes and he was the obvious choice for the Man of the Match. For England, Anderson with 3 for 31 in 9 overs and Swann with 1 for 33 in 10 overs but were let down by the likes of Dernbach and Woakes who bowled poorly.

Earlier, England got off to a solid start from its openers – Cook and Bell. Both got out in succession though leaving the hosts at 50 for 2 in the 13th over. Tim Southee dismissed them with Ian Bell (18, edging a loose drive to the keeper) and Skipper Alastair Cook (30, also edging a drive off an outswinger to the keeper). England then got a 67-run stand for the 3rd wicket before Joe Root (30 from 40 balls) got bowled by Nathan McCullum in an attempted reverse sweep in the 27th over. About two overs later, Jonathan Trott departed as well; scoring 37 from 53 balls, slog sweeping McCullum into the hands of deep mid wicket. England were in real trouble when Eoin Morgan got out caught fending off a near bouncer from left-armer Mitchell McClenaghan to make it 126 for 5 in the 30th over.

All-rounder Chris Woakes’ played a useful innings of 36 from 53 balls to guide the hosts to a modest total of 227 for 9. For the Kiwis, Southee bowled superbly for his 3 for 37 in 10 overs with two maidens. Kyle Mills with 1 for 36 in 10 overs and Nathan McCullum with 2 for 34 in 10 overs did a fabulous job as well.

The Kiwis got through to the target of 231 in 46.5 overs with Guptill remaining unbeaten on 103. Guptill’s 3rd ODI century came in 123 balls with 8 fours and 4 sixes. He was well supported by Ross Taylor who scored 54 from 77 balls and Grant Elliott who helped him put in a 47-run stand for the 4th wicket. England as a result could never bounce back in the game and it was a smooth victory for the visitors.

Toss and Teams: New Zealand have won the toss and asked England to bat first in the opening ODI at Lord’s. Wicket Keeper Luke Ronchi who had represent Australia not so long ago will be making his New Zealand debut today.