In a format that seems to have been specially invented for batsmen, rarely do bowlers manage to outshine those with the willow in hand, and, not surprisingly, since every aspect of T20 is heavily loaded in favour of the batsmen.

In a format that seems to have been specially invented for batsmen, rarely do bowlers manage to outshine those with the willow in hand, and, not surprisingly, since every aspect of T20 is heavily loaded in favour of the batsmen. Thursday was one such occasion when a bowler managed to upstage the opposition batters, so much so that his performance ended up being the difference between victory and defeat. Thanks to it, Rajasthan Royals proved that they could be effective away from home as well while Kings XI Punjab were again left to rue their weaknesses.

Rajasthan’s medium pacer Kevon Cooper was the man who stood out from either side in the clash. Of course, there were many other striking performances, but it was Cooper’s effort that was significant, especially for the kind of impact it had on the match. Cooper first broke the brilliant century stand between Aussies Adam Gilchrist and Shaun Marsh. More importantly, he was superb at the death not allowing the batsmen to get any sort of momentum. Cooper also added a couple of more big wickets to his tally, to completely change the complexion of the game. 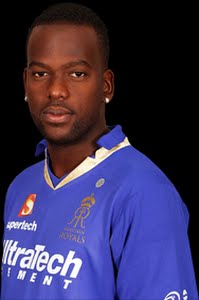 Going into the last five overs, Punjab were in a brilliant position to race towards a healthy total. However, once Gilchrist departed, they just could not maintain the momentum. While Marsh continued playing attractive strokes, he needed better support from the others, which did not come his way. Shane Watson’s early dismissal of David Hussey was crucial in this context. Also, ‘miracle man’ David Miller was due for a low score, and it is exactly what happened against Rajasthan. With Miller having a rare failure someone else should have ideally shouldered greater responsibility, but Manpreet Gony proved that he wasn’t that man.

Even as Cooper’s spell was a match-winning one, the Rajasthan bowler found able support from most of the others as well. Ajit Chandila kept things tight and also got the early breakthrough of Mandeep Singh. Watson also bowled a highly economical spell, as a result of which further pressure was built up on Punjab’s batsmen. The wicket Watson got was due reward for some excellent bowling. While Rajasthan’s bowlers were top notch, Punjab did not aid their cause by nullifying a great start. For the first time in the series, Gilchrist got a significant score, and put the team in a position of strength, but the final score they put up was too low.

Punjab did begin well with the ball, when Bipul Sharma crashed through Rahul Dravid’s defence. But, Rajasthan’s strength while chasing came to the fore again, and the lack of runs on the board made things doubly difficult for Punjab’s bowlers to build any sort of pressure. The consistent form of Ajinkya Rahane ensured that everything flowed smoothly during the chase. Watson gave him good company for a while and, even after he departed, young Sanju Samson once again showed why he is such a highly-rated talent. To put it simply, Punjab did not have enough runs on the board.

Turning point of the game: Cooper sending back Gilchrist for 42, following which Punjab’s innings lost momentum.