The fifth and final ODI between Sri Lanka and New Zealand ended in a no result because of heavy rain at Hambantota.

The fifth and final ODI between Sri Lanka and New Zealand ended in a no result because of heavy rain at Hambantota. The Series ended with Sri Lanka winning it by 3-0. The final ODI saw the Kiwis getting deprived of a possible easy victory as they had the hosts on the mat at 123 for 8 in 28.3 overs before rain rescued the latter. 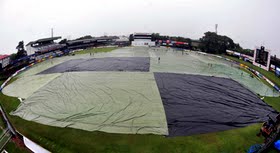 Asked to bat first, Sri Lanka were losing early wickets and despite all that opener Upul Tharanga managed to score 60 (from 94 balls with 8 fours). But when he got, Sri Lanka’s hopes of getting to a respectable total were down and out almost. However, rain spoilt New Zealand’s party.

For the Kiwis, Tim Southee claimed 3 for 18 in 5.3 overs while Andrew Ellis got 2 for 22. The Man of the Series award was given to New Zealand’s BJ Watling.