Australia’s experienced left-arm pacer Mitchell Starc and England’s Test skipper Joe Root have opted out of the Indian Premier League 2020 auction to be held in Kolkata on December 19. On the other hand, five Australians have listed their names with a base price of Rs 2 crore. The names include Glenn Maxwell, who recently took a break from international cricket due to mental health issues, and Chris Lynn, who was surprisingly released by Kolkata Knight Riders.

Fast bowler Pat Cummins, medium pacer Josh Hazlewood, and all-rounder Mitchell Marsh are the other three Aussies who have listed a base price of Rs 2 crore. Apart from the Australians, South Africa fast bowler Dale Steyn, and former Sri Lanka captain Angelo Mathews have also listed the same base price. 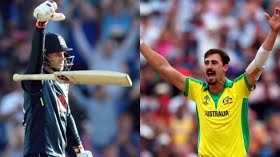 Coming back to Starc, he will be missing the T20 tournament for the second consecutive year. He was chosen at the 2018 IPL auction by Kolkata Knight Riders for Rs 9.4 crore, but was unavailable for the entire tournament due to injury. In 2019 too, he pulled out of the auction as he was nursing an injury, and did not want to jeopardise his World Cup hopes.

Apart from Starc, England’s Root is the other big name missing from the auction pool, in which a total of 971 players have registered themselves. Nine players have listed themselves with a base price of Rs 1.5 crore. They are Chris Morris, Kane Richardson, Shaun Marsh, Robin Uthappa, Eoin Morgan, Jason Roy, David Willey, Chris Woakes and Kyle Abbott.

While 971 cricketers have listed their names for the auction, only 73 spots are vacant. "The VIVO IPL Player Registration closed on 30th November with 971 players (713 Indian and 258 overseas players) signing up to be a part of the VIVO IPL 2020 Player Auction set to take place in Kolkata on 19th December 2019," a BCCI release said.

Of the overseas players, 55 are from Australia and 54 from South Africa. Further, 39 from Sri Lanka, 34 from West Indies, 24 from New Zealand, 22 from England and 19 from Afghanistan have also listed themselves.

Among the countries who have registered fewest names for the auction, Bangladesh have six, Zimbabwe three and USA one.