His life has been challenging: Cheteshwar Pujara reveals what makes the batsman mentally strong

India’s No.3 batsman Cheteshwar Pujara’s father Arvind has revealed that early setbacks in life and massive knocks in domestic and junior cricket have shaped the battle-hardened personality of the cricketer. Although Pujara did not score a hundred on the Australia tour, he played a significant role in blunting the opponents’ attack, facing 928 deliveries and scoring 271 runs with three fifties. At the Gabba, he took multiple hits on the body, but did not flinch.

Speaking to IANS, Arvind Pujara said, "He has scored a lot of runs staying at the crease in junior cricket. The more you practice and score runs, the more you get hit on the body. It is part and parcel of the game."

Recalling a triple century from Pujara at the age of 13, the senior Pujara added, "It was a three-day game. He batted long for 306 runs and then fielded. The more you practice, the more you will get hit by the ball. He got used to it. He has been playing consistently. In junior cricket, he has made 5,000 runs. In that also, you get hit. You don't get hit this much, but you do. He developed toughness because of that.” 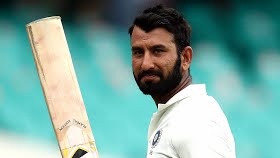 Arvind Pujara also revealed that, when the cricketer was 18, he lost his mother. "When he left Bhavnagar, he had spoken to his mother on phone. But when he reached Rajkot at 7 pm, he found his mother expired. He controlled himself remarkably. His life has been challenging," Pujara’s father added.

The Indian No.3’s father also revealed that the batsman broke his ACL (anterior cruciate ligament, which stabilises knee joint by connecting thighbone to shinbone) twice during IPL. “It took away a couple of years of cricket from him. What is worse, when he was under rehab the second time (for ACL injury) in Bangalore, I suffered a heart attack. All these setbacks have made him mentally tough," added Arvind.

Although criticised for his strike rate, Pujara stuck to his guns and, in the end, defied Australia with a number of stubborn knocks. He may not have scored as many runs as he did during the 2018-19 tour, but his presence out in the middle had the desired impact on Team India’s fortunes.