India went into the first Test of a long home season, against New Zealand at Kanpur, with the euphoria of the 500th Test surrounding them

India went into the first Test of a long home season, against New Zealand at Kanpur, with the euphoria of the 500th Test surrounding them. They had luck going their way as well. After winning the toss, they got the first use of conditions on a surface that is expected to offer plenty of turn in the coming days. They began in impressive fashion as well, with in-form openers Lokesh Rahul and Murali Vijay giving them a confident start. However, they could not capitalise on the foundation build, and ended up losing too many wickets. At the end of the day, 291 for 9 presented a poor return.

The problem for India on the day was that they just could not find that one big innings to steer the ship. Too many players got set, but not one carried on to reach three figures. And, that explains why New Zealand ended the day with the advantage. The Kiwis had a tough first session as India found themselves well placed at 154 for 1. But, once the second wicket partnership was broken, they collapsed in most unexpected fashion. Both Vijay and Cheteshwar Pujara got fifties but could not carry on. Considering that both are known for playing the big knocks, their departures ended up hurting India in a big way. It was the story of the day, of sorts, for India. 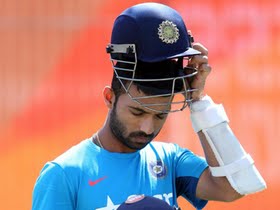 One of the defining moments of the match was definitely the dismissal of skipper Virat Kohli. He came in at the fall of the second wicket, as India were looking to rebuild. But, with a failed put against Neil Wagner, that landed in the hands of the fielder, he gave New Zealand the momentum, and they broke through from there. Had Kohli stayed on, things could have been different. But, it is equally true that Ajinkya Rahane has rescued India on numerous occasions in the past. This time though, he could not come up with the goods, failing to get to the pitch of a Mark Craig delivery and handing a simple catch to the fielder.

Question marks will again be raised over Rohit Sharma’s place in the team. His Test match temperament has been under question for a while now, and the lofted shot that got him out will only put him under greater pressure. Rohit has only himself to blame for the situation, for he got a start, and threw his wicket away. Had it not been for Ravichandran Ashwin’s innings lower down the order, India might have been all-out by the end of day’s play. They need to seriously have a look at their batting effort on the day, for it displayed a sense of overconfidence.

The Kiwis should be extremely pleased with their work on day one. Boult struggled to get his line and length right early on, but he struck important blows towards the end of the day, including the big wicket of Ashwin. Mitchell Santner also put up an impressive show. He was at the batsman most of the times, and was rewarded with the scalps of Pujara, Rahul and Sharma. Wagner and Craig got a wicket each, but those were undoubtedly two of the biggest ones – that of Kohli and Rahane.