Team India wicket-keeper Rishabh Pant may be under fire from many quarters owing to his poor performances with both the bat and behind the stumps.

Team India wicket-keeper Rishabh Pant may be under fire from many quarters owing to his poor performances with both the bat and behind the stumps. However, Rohit Sharma, the captain for India’s T20I series against Bangladesh has firmly stood behind the under-fire keeper, stating that people must just leave him alone for a while.

Pant made a basic wicket-keeping error when he goofed up on a simple stumping of Bangladesh opener Liton Das in the second T20I, by gathering the ball in front of the stumps, and thus negating the dismissal. In the first T20I as well, he convinced Rohit to go for a DRS review, but the replays showed there was no edge at all. With the bat as well, he has been constantly criticized for throwing his wicket away.

“You know there is a lot of talk happening about Rishabh Pant every day, every minute. I just feel he needs to be allowed to do what he wants to do on the field. I would request everyone to keep their eyes away from Rishabh Pant for a while,” Rohit was quoted as saying in media and PTI reports ahead of the T20I series decider against Bangladesh in Nagpur. 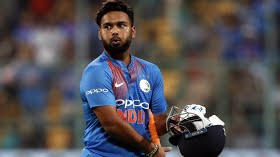 The Indian skipper termed Pant fearless cricketer and felt that giving him some space would allow him to perform better. While Pant has a hundred each in England and Australia in Tests, he averages in the low 20s in ODIs as well as T20Is. Calls have been growing for Sanju Samson to get a chance ahead of Pant.

“Focus on him a lot more when he is doing good things also, not just bad things. He has been learning, there have been times he has kept well also. He is trying to do what the team management wants him to do,” Rohit went on to add about Pant.

India takes on Bangladesh in the series decider at Nagpur on Sunday. While Bangladesh stunned India in the first T20I at Delhi by seven wickets, India hit back to square the series 1-1 at Rajkot.