If Sri Lanka beating New Zealand in the latter’s backyard will be seen as an upset, West Indies getting the better of Australia anywhere is expecting the impossible, at least in the Test format

If Sri Lanka beating New Zealand in the latter’s backyard will be seen as an upset, West Indies getting the better of Australia anywhere is expecting the impossible, at least in the Test format. Such is the gulf that has developed between the two sides over the years, the Frank Worrell has been reduced to a farce, with hardly any competitiveness between the teams. Not much is expected to improve as Australia and West Indies renew their rivalry at Hobart. Australia will be keen to continue with the great form they displayed against the Kiwis while Windies would hope they can at least make a mark.

It goes without saying that Australia are superior to West Indies in both batting and the bowling department. David Warner, who had a spectacular series against New Zealand especially in the first half, will be keen to continue his scintillating run. He may not be as motivated since the West Indies bowlers will not present him with a great challenge. Alternately, it is an opportunity for him to get some easy Test runs, which is rather rare in international cricket. Joe Burns also impressed against the Kiwis, and would be looking to make further gains against a weak West Indies bowling. 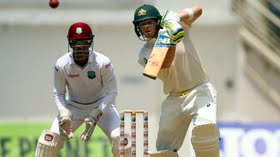 While Australia have a pretty much well-balanced team, there are players who still need to establish themselves in the side. Usman Khawaja’s injury means Shaun Marsh has got another chance, possibly his last one, to prove his Test credentials. Also, with Mitchell Johnson having retired, James Pattinson comes back into the scheme of things. The fast bowler has been more out than in of the team, so he will be keen to make an impression. Overall, Australia have a strong side, and they should be extremely disappointed if they don’t end up whacking the Windies.

Though cricket is an unpredictable game, even West Indies wouldn’t be dreaming of a victory against the mighty Aussies. They would be happy even if they manage to compete. And for that, their underperforming seniors must stand up and deliver. With no Chris Gayle, Marlon Samuels is the first name that comes to mind. He had a horrid run in Sri Lanka, but considering the lack of options, West Indies have persisted with him. Jermaine Blackwood has done well for the team in the recent past, and he clearly is a batsman to look forward to. The other youngsters in the team must also look at it as an opportunity to challenge themselves. If West Indies manage to make an impression, it will be a moral victory for the depleted side.