Ever since their meeting in the 2007 World Cup where Ireland made their debut, Ireland and Zimbabwe have been involved in a number of close contests

Ever since their meeting in the 2007 World Cup where Ireland made their debut, Ireland and Zimbabwe have been involved in a number of close contests. The first ODI of a new series played at Harare on Friday was nothing different. Batting first, Ireland only managed a poor 219 for 8 on board, that too courtesy Gary Wilson’s unbeaten 70. However, they fought back hard with the ball. Craig Ervine, making a comeback, and Sikandar Raza, made 60s each, the latter remaining unbeaten as Zimbabwe eked out a close win in the penultimate over, with only two wickets left.

On a slow pitch, Zimbabwe struggled against the spinners. George Dockrell, who is highly rated, once again stood out. His 2 for 29 in 10 overs strangled the hosts in the middle of the chase. This was after John Mooney and Andy McBrine combined to send back the Zimbabwe openers before the total had reached 50. Sean Williams and Ervine then featured in a rescue act. They played it safe, and batted in an assured manner, as Zimbabwe neared 100. But, with the score on 98, having Williams stumped for 24. The wicket brought Ireland right back into the game. 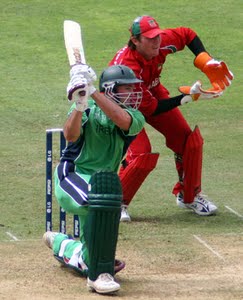 Ervine, who missed the series against Pakistan due to injury, began the rescue act for the hosts. He is usually flamboyant, but this time took his time, and ensured he kept the team in the hunt. Ervine was beginning to get good support from Raza as he reached his half-century in 65 balls. However, McBrine had him caught behind for 60 as Ireland found an opening again. Malcolm Waller struggled to rotate the strike, and Luke Jongwe was run out as the match started swinging in Ireland’s favour yet again.

Raza who was holding up one end, seemed to be running out of company when he was joined by Wellington Masakadza. Raza found surprisingly effective support from the debutant as the duo rotated the strike, and kept the scoreboard ticking. However, Masakadza was run out going for one tight single too many. The match was still tight when Tinashe Panyangara joined Raza. The balls weren’t an issue, but the wickets definitely were. With the spin options having run out, Ireland had to bring back the pacers, and that clinched it for Zimbabwe. Panyangara slapped Murtagh down the ground to take Zimbabwe home.

Earlier, Ireland crumbled to 54 for 3, in the face of intense bowling from the Zimbabwe pacers. Panyangara, Chibhabha and Jongwe combined to claim a wicket each. Ed Joyce and Gary Wilson then featured in a repair job for the visitors. Joyce made a hard-fought 53 before falling to John Nyumbu. Wilson then enabled Ireland to finish with a somewhat respectable score. At one stage it seemed they wouldn’t reach 200. But, Wilson got good support from McBrine, who smashed 23 from 14. Ireland finished their innings on a high, and got some momentum. But, it wasn’t enough to claim victory.