After another record ton, skipper Rohit Sharma admits he was under pressure after Dharamsala

Following his scintillating hundred on Friday, Indian stand-in skipper Rohit Sharma said it was his ability to score everywhere was responsible for him becoming

Following his scintillating hundred on Friday, Indian stand-in skipper Rohit Sharma said it was his ability to score everywhere was responsible for him becoming the joint-joint-fastest T20 centurion, at Indore.

Sharma's 35-ball ton led India to a 88-run victory. The opener, who smashed 10 sixes and 12 fours, said after the game, "It is important that you try and play with the field. I want to score all round the park not just in one area. So, for me it is important that I try and explore the fielding that the opposition keep for me.” 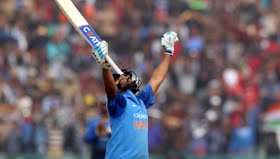 He added, “In all formats, I try and do that, because hitting in just makes you predictable. It is always important to score runs all over the field, and that is my strength. So I try and stick to it and I try and play with the field.”

Sharma did admit that he was under pressure after the humiliation in the first ODI in Dharamsala. "After the first match in Dharamsala, the pressure was very high. In Dharamsala, our position was such that we were about to score the lowest score. I started to think about my captaincy and my team; captaincy was turning out to be difficult for me. I was handed the captaincy for the first time and I found myself in such circumstances and the team lost. It's not like there is no pressure. Pressure is always there," he said.