World Cup 2019: Bangladesh, West Indies aim to get campaign back on track

After an impressive start to the World Cup, both Bangladesh and West Indies seem to have lost their way. While Bangladesh

After an impressive start to the World Cup, both Bangladesh and West Indies seem to have lost their way. While Bangladesh began the tournament with a victory over South Africa, West Indies outshone Pakistan. However, the thing has gone downhill for both teams since.

West Indies did not look in any sort of rhythm against England as they were easily outdone. They were reasonably placed at one stage to cross a target of 275. Instead, they crumbled to 212 all out. Their batting really has been anywhere near its best apart from Nicholas Pooran. Chris Gayle will need to lift the team and better contributions from Shimron Hetmyer and Shai Hope.

West Indies bowlers did not have too big a score to defend against England. Still, their bowling could have done a better job. Oshane Thomas had a rare off day against England but Sheldon Cottrell, Shannon Gabriel, and skipper Jason Holder failed to make much of an impact. What would further worry West Indies is the fact that Andre Russell and Cottrell were able to bowl only five overs against England before having to leave the field. 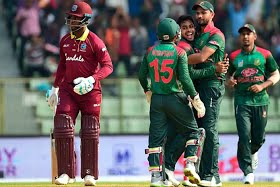 For Bangladesh, the tournament has all been about Shakib Al Hasan. Batting at number three, he has been the mainstay of the team's batting. However, they will need a much more rounded effort from the rest of the batting order. The experienced men in Mushfiqur Rahim, Mahmudullah, Tamim Iqbal and Soumya Sarkar must stand up and deliver for the team.

Bangladesh does have the bowling to compete with West Indies. Their slower men, in particular, could trouble the Windies. Bangladesh will also be confident as they have tasted success against the opponent in recent times. The weather at Taunton is expected to be sunny for a start with cloudy conditions predicted later on. Both Bangladesh and West Indies are languishing with three points each so they would be desperate to turn things around.