India’s poor record at Wankhede will give Windies hope

All eyes will undoubtedly be on Sachin Tendulkar for obvious reasons when the second Test of the series against West Indies gets underway at Wankhede Stadium on Thursday.

All eyes will undoubtedly be on Sachin Tendulkar for obvious reasons when the second Test of the series against West Indies gets underway at Wankhede Stadium on Thursday. Even as the focus will be on Tendulkar and his final and 200th Test, India shouldn’t forget that they have a Test to be played, and one they should try their best to win, to give Tendulkar a fond farewell. While West Indies’ weak show at Eden Gardens means India will go in on a high, India are likely to be posed a greater challenge at Wankhede. 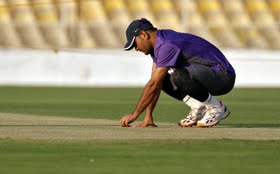 India have an extremely poor record at the venue, particularly in recent years. Since the turn of the millennium India have featured in seven Tests at the venue, and have lost four out of them while being victorious in only two, and the other Test ended in a draw. Of the two Test wins, one came on a minefield of a pitch against the Aussies back in 2004, in a match that lasted less than three days, and the other against a weak West Indies back in 2002, when India won by an innings and 112 runs.

Looking at the four losses, one of them came against South Africa in 2000, while the others were against Australia in 2001, England in 2006 and England again last year. The results prove that India have had a poor time against the stronger sides. One of the reasons for the same is that Wankhede is different to the other venues in India. Unlike, most other stadiums in the country, Wankhede offers a lot more to the pacers since there is plenty of bounce for the pace bowlers early on. This is one of the reasons why India’s batsmen have struggled since their weakness against the short ball is renowned.

The worrying aspect for India would be that, last year, they lost the battle of spin to England. Since India’s strength is spin, Dhoni asked for rank turners for the series. However, the move backfired at Mumbai as Monty Panesar claimed 11 wickets in the match, and Graeme Swann picked up eight. India were cleaned up for 142 in their second innings, with Gautam Gambhir’s 65 being the only innings of note. West Indies are a much less talented outfit, but Shane Shillingford demonstrated at Kolkata that he has the ability to trouble the Indian batsmen.

If West Indies are aware of India’s poor record at Wankhede, their hopes of pulling off an upset would be emboldened. Windies must look at the positive side of things as they have nothing to lose. India will be expected to win, and win it for Tendulkar. If West Indies can hang in there, and compete with India they might just be able to take advantage of the distraction factor in the Indian camp owing to the Tendulkar farewell. In spite of their crushing win at Eden Gardens, India cannot take things lightly at Wankhede for the abovementioned reasons.