Australia retained the Ashes by overpowering England by 185 runs in the fourth Test at Manchester on Sunday. On the final day, the hosts crumbled to 197

Australia retained the Ashes by overpowering England by 185 runs in the fourth Test at Manchester on Sunday. On the final day, the hosts crumbled to 197 all out, with opener Joe Denly the only one to cross the fifty mark.

For the Aussies, Pat Cummins starred with 4 for 43 while Josh Hazlewood and Nathan Lyon both claimed two wickets each. Earlier, it was again Steve Smith who stood out for the Aussies with scores of 211 and 82, the latter being his lowest score! The knock in the second innings came after Australia found themselves in trouble at 44 for 4.

Smith has had a sensational Ashes 2019 with 671 runs from just five innings in the series. The next best is Ben Stokes, who is a distant second with 354 runs. 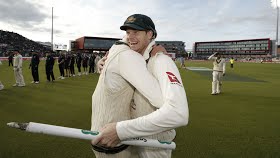 After yet another impressive performance, Smith speaking to the broadcasters said that he was very keen to get the urn here after the disappointments in 2013 and 2015. "It feels amazing to know the urn is coming home now. I've been here a few times when things haven't gone our way. We didn't perform to the best of our abilities in 2013 and 2015," an elated Smith admitted.

"To know it's coming home is extremely satisfying. To come back here, I always wanted to tick off my bucket list to get the urn over here. Obviously there is another game and we would like to win that. I've been here a few times, I wanted to tick this off my bucket list," the former skipper, who has made a sensational return after the ball-tampering ban, added.

Smith also praised skipper Tim Paine and he was proud to be a part of the current set-up. He particularly pointed out the move to bring in Marnus Labuschagne, which led to the wicket of Jack Leach.

Analysing the further, Smith told the broadcasters, "I didn't enjoy watching last week. But what a feeling today. Special feeling and really proud to be part of this group of boys. We've won key moments, built up pressure on England. It's incredibly pleasing to get rewards for the hard work. Tim has done a terrific job, he's got a group together doing a terrific job. Bowling Marnus showed a bit of courage, Tim's been exceptional."

Asked about his 12-month ban from the game, Smith said he took it up as a positive and used the time to freshen up for future challenges by working on the game harder.

"A year off where I could freshen up, I've been so relaxed and chilled hard but working incredibly hard on by game. I love batting, don't really like watching cricket. I'm incredibly proud of the way I've performed and helped the team. I'm two hundreds from two games at The Oval, so it's a place I like batting. We came here to win the Ashes. We'll do our best to go 3 up at The Oval," Smith signed off.