No cleansweep for India as England get consolation win

England saved their pride by winning the fifth and final ODI at Leeds and thus avoiding a cleansweep. India had to be content with a 3-1 series win after going down by 41 runs at Headingley.

England saved their pride by winning the fifth and final ODI at Leeds and thus avoiding a cleansweep. India had to be content with a 3-1 series win after going down by 41 runs at Headingley. Chasing a big target of 295, India was out of the race early after losing its top three without much on the board.

Half centuries from AT Rayudu and Ravindra Jadeja managed to bring down the margin of defeat. Jadeja got into great touch but eventually missed out a maiden international century by 13 runs. The left-hander who came in with India at 132 for 5 went on to smash 87 from 68 balls with 9 fours and 2 sixes before being the last man out. Ambati Rayudu played an impressive knock of 53 from 65 balls with 3 fours and 2 sixes.

India was bowled out for 253 in 48.4 overs with Ben Stokes picking up 3 for 47. The real damage though was done by James Anderson and Moeen Ali who got two key wickets each at the start. Joe Root was the Man of the Match for his century while the Player of the Series went to Suresh Raina. 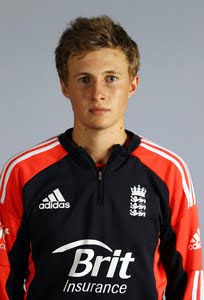 England innings: England finally got its batting right to pile up a big total of 294 for 7 on a pitch that took some turn but otherwise a batting paradise. Local Yorkshire boy Joe Root scored a splendid 2nd ODI century while Jos Buttler and Ben Stokes produced energetic innings to help England overcome the Indian spinners.

The hosts lost their first wicket in the 4th over when Alex Hales was bounced out by Umesh Yadav with the right hander hurried through in a pull shot. Moeen Ali came in at no.3 and lasted only 8 balls before he chased a wide ball from Bhuvneshwar Kumar for a lofted shot to get caught at thirdman.

England were on the backfoot at 39 for 2 in 7 overs but recovered nicely with a 52-run stand that was broken by Suresh Raina. Alastair Cook was dismissed for a 64-ball 46 when he top edged his sweep off Raina to the keeper. Eoin Morgan failed again as he was stumped by Dhoni after getting beaten by a turning off break from Ashwin which had him overstretching.

From a tricky stage of 117 for 4 in 29 overs, England bounced back in style to 225 for 5 by the 43rd over. The batting powerplay was taken apart for as many as 52 runs by Jos Buttler and Joe Root. Buttler got out for 49 from 40 balls when he was run out after blindly taking off for a leg bye. Along with Root, Buttler put on England’s first 100-run stand of this series.

Joe Root went on to score 113 from 108 balls with 10 fours and 3 sixes. He got out in the 46th over paddle sweeping Shami into the hands of short fine leg. The finishing touches came from Ben Stokes who smacked 33 not out in 23 balls. For India, Mohammed Shami with 10-0-52-2 bowled superbly in all situations of the innings while R Ashwin came up with 10-2-49-1. Raina once again did a useful job of giving away only 32 off his 7 overs besides Cook wicket.

Toss and Teams: India have won the toss and for the third time in a row have asked England to bat first. The conditions for this fifth and final ODI at Headingley in Leeds are slightly overcast and the ball is expected to swing around. The pitch has a bit of moisture and apart from that should be a good batting track.

India has made just the one change with Umesh Yadav replacing Dhawal Kulkarni. England have made two changes with Ben Stokes and James Tredwell replacing Gary Ballance and Harry Gunrey.