Nathan Lyon says he has a lot to learn from Ashwin

As Australia begin their Test series against India at Pune, number one Test bowler Ravichandran Ashwin will be their biggest threat.

As Australia begin their Test series against India at Pune, number one Test bowler Ravichandran Ashwin will be their biggest threat. Australia too have a decent offie in their own ranks in Nathan Lyon, who admits that he has a lot to learn from the Indian spinner. 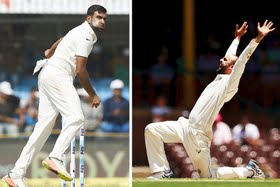 Aswhin took 28 wickets in the series against England 4-0. On him, Lyon was quoted as saying in an NDTV report, "I have watched a lot of Ashwin. He is a world class bowler and I can learn a lot from him.

"I'm not going to tell you what I have been working on. I definitely changed my approach to the subcontinent conditions as compared to four years ago. We have to wait and see how it comes out, I guess.

"I have been watching a lot of footage of Ashwin, the way he goes about it, his different release points. He is a world-class spinner, the best at the moment in the world, there is a reason for it. Been studying him a lot, hopefully I can put that in play," he added.

Australia were thrashed 3-0 in Sri Lanka last year, and went on to lose to South Africa 2-1 at home. Reacting to the defeats, Lyon said, "I am aware you need to change a few things here and there. But it's a game of cricket. We are playing on the same wickets as they are. So there are no excuses. There is going to be different challenge lying ahead for us on this tour. We have a really good squad together. Wickets are going to turn, going to reverse, the big quicks are going to play a role. It's a good challenge for the whole team."

The offie has now played 63 Tests and has taken 228 wickets. On the responsibility of being the senior spinner, he stated, "I'm enjoying the responsibility, doesn't add any more pressure. Our job is to bowl well together and in partnership and put pressure. I am looking at this as a chance to pass knowledge to some, especially the younger spinners who have not toured here before," said Lyon.