With the league stages done and dusted, India will face New Zealand in the first semi-final of World Cup 2019 at Old Trafford in Manchester. India go into the match on a high having registered only one loss against England in the group stage while New Zealand just about sneaked into the last four after losing their last three matches.

The results will, however, count for little as the teams face off at Manchester. It will be how they perform on the day that will matter. India, despite ending table toppers, are heavily dependent on Rohit Sharma and Virat Kohli and now, to an extent, Lokesh Rahul. If Trent Boult and Lockie Ferguson, returning from injury, can knock over the top three cheaply, they would be in with a great chance of progressing to their second consecutive World Cup final. 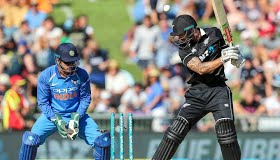 Indian skipper Kohli will be keen to deliver on the big stage. Despite getting five half-centuries in a row, he would know deep inside that he hasn't performed to the best of his ability. It is still not too late though. If he can come up with a three-figure knock against the Kiwis everything else will be forgotten. India are likely to make a few changes to the playing eleven. Kedar Jadhav might come in for Dinesh Karthik to strengthen the bowling a little while Mohammed Shami might be preferred over Bhuvneshwar Kumar. Ravindra Jadeja is also likely to retain his place over ome of the two lead spinners. The major responsibility though will continue to lie with Jasprit Bumrah.

New Zealand will need to get their batting sorted out to compete with India. Martin Guptill, one of the team's senior-most players has been woeful at the top of the order. He will need to find his mojo back at this now-or-never stage for the Kiwis. The team would also be in a quandary over whether to bring back Colin Munro or continue with Henry Nicholls, neither of whom has been having a great run out in the middle.

Just like India are heavily dependent on Rohit and Kohli, New Zealand have reached this far primarily because of the efforts of skipper Kane Williamson, who has two centuries to his name in this World Cup. In the last few games that he failed, the Kiwis have been found out. Ross Taylor too would need to raise his game as a senior pro, having made a couple of terrible choices in the last two matches. The all-round trio of Colin de Grandhomme, Jimmy Neesham and Mitchell Santner give New Zealand an edge over India. But, can they exploit it to the hilt?