Royal Challengers Bangalore failed to make it to the play offs after their shock defeat to Deccan Chargers. This has paved the way for Chennai Super Kings into the last four of IPL 5.

Royal Challengers Bangalore, arguably the strongest team of IPL 5 because of the sheer presence of the in-form Chris Gayle has crashed out of the tournament following a shock defeat against hosts Deccan Chargers! With the RCB losing out to DC, defending Champions Chennai Super Kings get an unexpected entry into the play offs despite all their inconsistent performance this season. CSK is on level with RCB with 17 points but goes through to the next round based on a superior net run rate!

It was only a modest target of 133 to chase for the fancied RCB batting line-up at the Rajiv Gandhi International Stadium in Hyderabad. Chris Gayle set the tone for an early finish when he clobbered Manpreet Gony for 24 runs in the second over of the RCB innings. But in the 3rd over Chris Gayle (27 from 10 balls with 3 fours and 2 sixes) found the extra pace of Dale Steyn too hot to handle and ended up chopping a cut shot onto his stumps after backing away from the line. 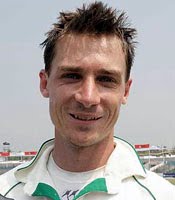 In the 5th over, Dale Steyn into his third over got the big wicket of Tillakaratne Dilshan who played across the line to a pacy delivery to get lbw. By the 10th over, there was more pressure on RCB as another big star AB de Villiers (4) departed cheaply driving Amit Mishra into the hands of covers to reduce his side to 55 for 3. Mishra went onto take another wicket in the same over leaving RCB on the mat at 57 for 4.

The visitors got back in the match as Saurabh Tiwary who had earlier retired hurt due to a hamstring cramp came back to join Skipper Virat Kohli. Just when things alright with a few boundaries coming through, Virat Kohli holed out to in the deep off the innocuous Ashish Reddy with RCB still needing 30 more runs to win from 24 balls but with only five wickets in hand. It was all left to Saurabh Tiwary (30 from 27 balls with a four and a six) to win the match for RCB along with the lower order but under pressure the left hander perished in the 19th over at 111/7.

A good last over from Ashish Reddy ensured that the Chargers won the match by 9 runs and thus knocking out RCB. Dale Steyn was the real hero of the match as he claimed dream figures of 4-0-8-3. Ashish Reddy did his bit by getting the key wicket of Kohli and ending the match with 4-0-25-3.