KKR vs CSK review: Kolkata should be furious over manner of defeat

There are matches you win through some excellent performances, and there are matches you allow the opponents to win through some equally poor efforts. Kolkata’s Knight Riders’ loss on Tuesday definitely falls in the latter category. They had no business going down to Chennai Super Kings, especially after restricting them to a below par total, and then themselves getting off to a rollicking start with the bat. Kolkata had everything going for them, and thus have only themselves to blame for snatching defeat against Chennai. At the same time, a lot of credit must go to Chennai for hanging on, and throttling Kolkata in the end.

Kolkata’s middle order must take the blame for defeat against Chennai at Chepauk. Although they lost Gautam Gambhir in the very first over, Robin Uthappa more than made up for it with a sizzling return to form. His blazing cameo had put the side in a commanding position, and all the middle order had to do was play sensible cricket. But, they somehow could not get their act together. It was a rather inexplicable batting effort, especially considering that there was no pressure of the mounting run-rate on them. 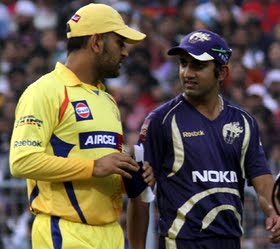 The blame for the defeat must specially fall on four people -- Manish Pandey, Suryakumar Yadav, Yusuf Pathan and Ryan ten Doeschate. The first three struggled to rotate the strike, and finished at a strike rate of well under 100, which is the minimum rate at which a batsman is expected to score in T20s. Their poor batting allowed Chennai to build the pressure back on Kolkata. Ryan Doeschate also struggled to get going, and although he finished with an impressive strike rate, the blows came too late in the day. He was also responsible for running out the dangerous Andre Russell.
While Chennai must consider themselves lucky to have ended up on the winning side, they must be credit for the manner in which they tied up the Kolkata batsmen. Ravichandran Ashwin was brilliant even though he bowled only two overs due to injury. He turned the match around in 12 balls, not only stifling the runs, but also getting the big scalps of Uthappa and Pandey. Ashwin’s effort threw the door open for Chennai, and rest trudged in. Ashish Nehra and Mohit Sharma chipped in as they always do, but it was Dwayne Bravo who completely shut Kolkata out with his variations towards the end.
Earlier in the day, Kolkata themselves bowled with excellent command against a strong Chennai batting outfit. They deserve praise for the manner in which they kept the likes of Brendon McCullum, Dwayne Smith and Suresh Raina down. It was a fantastic bowling effort, with Piyush Chawla leading the way, and Brad Hogg and Andre Russell providing great support. Pat Cummins and Umesh Yadav also kept things tight. It was an effort worthy of victory, but Kolkata’s batsmen sadly let the team down.
By A Cricket Analyst