An all-round clinical performance from Rahul Dravid’s Rajasthan Royals saw the hosts hammer the fancy Mumbai Indians by a record margin of 87 runs at the Sawai Mansingh Stadium in Jaipur.

An all-round clinical performance from Rahul Dravid’s Rajasthan Royals saw the hosts hammer the fancy Mumbai Indians by a record margin of 87 runs at the Sawai Mansingh Stadium in Jaipur. Riding on a superb knock from Rahane, Rajasthan Royals batting first on a dry surface piled up 179 for 3 in 20 overs. Mumbai Indians with all the hype of having Sachin Tendulkar and Ricky Ponting in their batting line-up choked against some lesser known bowlers to get bowled out for an embarrassing 92 all out in 18.2 overs.

Rajasthan Royals got a wonderful start from Shane Watson who scored 31 from 25 balls and Rahane who carried his bat through with an unbeaten 68 from 54 balls (with 8 fours and a six). Wicket Keeper Dishant Yagnik who came in at no.3 chipped in with a 24-ball 34 while Brad Hodge came up with a crucial cameo of 27* from 15 balls. 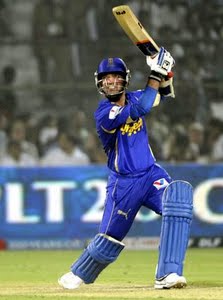 In their run chase, Mumbai Indians lost its paper tigers – Tendulkar and Ponting dismissed tamely by the slow off breaks from Ajit Chandila. The ball turned with some nice bite as Ajit Chandila and left-arm spinner Ankeet Chavan made life miserable for the Mumbai Indians despite the ball being hard and new. The visitors just couldn’t get any momentum going and lost the big wickets of Rohit Sharma and Kieron Pollard with just 31 runs on the board inside 8 overs.

It was a losing cause for the Mumbai Indians after Pollard’s wicket. The in-form Dinesh Karthik tried to get his team back in the game but left the park with a slow 30 from 32 balls. Mumbai Indians from 61 for 5 in 12.4 overs were bundled out in just 18.2 overs with all the Rajasthan Royals’ bowlers doing their bit.

Toss and Teams: Hosts Rajasthan Royals have won the toss and elected to bat first at the Sawai Mansingh Stadium in Jaipur.

Sep 23, 2021: Mumbai Indians (MI) will take on Kolkata Knight Riders (KKR) in match 34 of IPL 2021 at the Sheikh Zayed Stadium in Abu Dhabi on Thursday. MI have a tremendous record against KKR in the IPL. They have won 22 and lost merely six matches against the Kolkata franchise. As such, the defending champions wouldn’t have got a better opponent to face as they look to bring their IPL 2021 campaign back on track.