The Rajasthan Royals (RR) will take on the Lucknow Super Giants (LSG) in match number 20 of the Indian Premier League (IPL) 2022 at the Wankhede Stadium in Mumbai on Sunday. This will be the second game of the double-header and will get underway at 7:30 PM IST. Both Rajasthan and Lucknow are being considered among the strong teams in the 10-side event. RR have won two of their three games although they lost to Royal Challengers Bangalore (RCB) in their last match. Since going down to Gujarat, Lucknow have recovered brilliantly, winning three matches on a trot.

In their previous game, Rajasthan went down to Bangalore by four wickets. Batting first they posted 169 as Jos Buttler followed up his 100 with another brilliant knock of 70 not out in 47 balls. It wasn’t enough though as RCB chased down the target despite being 87 for 5 at one stage. Dinesh Karthik and Shahbaz Ahmed sunk RR. 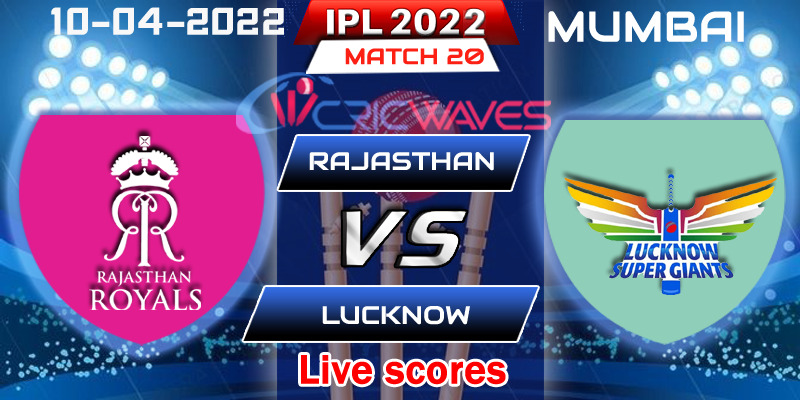 Rajasthan will need runs from Yashasvi Jaiswal. He has just not looked the part. Devdutt Padikkal has got starts, but he needs to convert those. Sanju Samson and Shimron Hetmyer have been in fine form but the bowling was a bit of a letdown. Ravichandran Ashwin, in particular, was disappointing. His poor over turned the match on its head. He will be keen to make amends.

Quinton de Kock was brilliant for LSG in the previous match. Sunday’s game will possibly see the debut for Marcus Stoinis for the franchise. Krishnappa Gowtham was wonderful with the ball against DC, claiming the wicket that put Lucknow on top. Ravi Bishnoi and Jason Holder were also impressive. LSH will be keen to carry on in the same vein.