South Africa remain World No.1 with a 309-run win in Perth Test

South Africa wrapped up a massive 309-run win in the deciding Perth Test after taking a little over an hour in the final session on Day 4 to bowl out the Aussies. An annoying 10th wicket stand of 87 runs between Mitchell Starc and Nathan Lyon managed to delay the inevitable South African victory.

South Africa wrapped up a massive 309-run win in the deciding Perth Test after taking a little over an hour in the final session on Day 4 to bowl out the Aussies. An annoying 10th wicket stand of 87 runs between Mitchell Starc and Nathan Lyon managed to delay the inevitable South African victory. South Africa with this 1-0 series win remain as the World No.1 team in Test Cricket.

It wasn’t tough for the South Africans to make inroads in the Australian middle order despite the pitch being pretty flat. After Lunch, Ed Cowan (53 from 149 balls with 5 fours and a six) departed after pulling Steyn into the hands of deep backward squareleg. Michael Clarke along with Michael Hussey collected some easy runs but threw his wicket away to leave the Aussies at 188 for 5. Clarke (44 from 52 balls with 8 fours) had jumped out of his crease to a tossed up delivery from Robin Peterson and got beaten by the turn for a stumping. 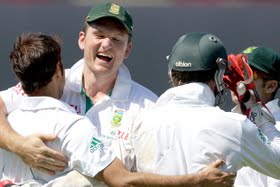 Michael Hussey lasted 52 balls for his 26 before his cover drive on the up off Steyn was caught behind. Wicket Keeper Matthew Wade (10) followed him soon by dragging a heave off Peterson into the hands of short mid wicket. The next to fall was Mitchell Johnson caught behind in a backfoot drive off Philander while John Hastings (20) played a couple of big shots before he edged Morne Morkel into the slips.

South Africa somehow couldn’t quickly dislodge the 10th wicket pair and that allowed Mitchell Starc to play some lovely shots through the line. Starc raced away to a maiden Test fifty and remained unbeaten on 68 (from just 43 balls with 9 fours and 2 sixes) before last man Nathan Lyon (31 from 43 balls) was eventually edged out to slips by Dale Steyn. Skipper Graeme Smith took as many as five catches in the innings. Australia were bowled out in just 82.5 overs for 322.

The Man of the Match award rightly went to Hashim Amla while the Player of the Series was given to Michael Clarke for his two double centuries.

Lunch Report: South Africa have taken three big wickets in the morning session to set themselves for a victory possibly by the end of the fourth day’s play. One of the wickets included that of Ricky Ponting who had to walk back with another failure although the WACA crowd gave the former Australian Captain a standing ovation. The Aussies at Lunch are 110 for 3 in 38 overs with Cowan on 37* along with Skipper Clarke who is on 8*.

In just the second ball of the morning, South Africa tasted success with David Warner (29) edging a length delivery around middle from Philander which seamed away to force an edge to slip. Shane Watson lasted 46 balls for his 29 before he got squared up on the backfoot and edged a lifter from Morne Morkel into the slips.

The moment for which the crowd was waiting anxiously had come when Ricky Ponting came out to bat for one last time for Australia. Unfortunately, Ponting lasted only 23 balls for his 8 before he had a soft dismissal, caught at slip off Robin Peterson in an attempted cut shot which was defeated by the lack of room coupled with the extra bounce.