The more you play with straight bat in English conditions, more runs you will get: Shardul Thakur

Team India all-rounder Shardul Thakur was the surprise top-scorer for the team on Day 1 of The Oval Test. Sent into bat after losing the toss, India had crumbled to 127 for 7. However, a feisty 57 of 36 balls from Thakur lifted India to 191. Thakur slammed seven fours and three sixes in his innings. He reached his fifty off 31 balls, going past Ian Botham's record to register the fastest Test fifty on English soil.

"For me, it was a challenge and whenever I get to bat, I have to create such an impact that it opens the door for my team's victory," added Thakur, who registered his second Test fifty, the first one coming in the famous win in Brisbane. 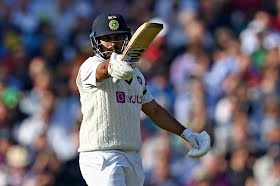 Incidentally, Thakur is referred to as ‘Beefy’, which is Ian Botham's nickname, in the Indian dressing room. Asked about it, the Mumbai cricketer replied, "Pretty happy getting so much love from teammates that they want to call me by a certain nickname.”

On the decision to promote Ravindra Jadeja in the batting order, Thakur confirmed that India wanted a left-right combination in the middle. "Whether Rishabh goes or Jaddu goes, it doesn't really matter. We have seen Jadeja score crucial runs and bat patiently. It was just to use left right combo, we send him up the order," he explained

Playing straight was the standout feature of Thakur’s innings on Thursday. The cricketer said about it that his coaches had advised him play as straight as possible and he tried doing the same. He elaborated, "The more you play with straight bat in English conditions, more runs you will get. The ball swings excessively so its better to play straight. My coaches tell me to play with straight bat and score as much as possible with the tail."

Looking ahead to Day 2, Thakur concluded, "If you look, our total (191) is not very high. We have an amazing opportunity to restrict them to low total and game will be neck and neck.”