You probably have to speak to the selectors: Kohli on Pujara-Rahane future

India Test captain Virat Kohli refused to divulge anything about the future of struggling senior batters Cheteshwar Pujara and Ajinkya Rahane following India’s 2-1 series loss to South Africa on Friday. Asked about what would happen to the two now that they have failed in another series, Kohli stated that it will be the selectors who will take the call.

Pujara and Rahane managed only one fifty each in the three matches, averaging in the early 20s. Their form has been a question mark for a couple of seasons now. At the post-match conference following India’s defeat, Kohli was asked about the future of the duo. He replied, "I cannot sit here and talk about what's gonna happen in the future. That's not for me to sit here and discuss. You probably have to speak to the selectors, what they have in mind. This is not my job." 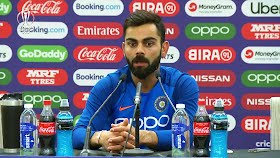 Kohli, however, added, although a bit unconvincingly, that he would continue to back the two players considering what they have done for the team over the years. He commented, "As I have said before, I will say again, we will continue to back Cheteshwar and Ajinkya because of the kind of players they are, what they have done in Test cricket for India over the years, playing crucial knocks in the second innings (in Johannesburg) as well. These are the kind of performances we recognise as a team.” He, however, concluded the statement by saying, "What the selectors decide to do, I obviously will not comment sitting here."

The Indian captain also minced no words in blaming the batting for letting the team down. He admitted that frequent batting collapses are unacceptable. India crossed 300 in the first innings of the series and went on to win in Centurion but experienced batting collapses in the remaining two Tests. The 33-year-old conceded, "It is definitely batting. I don't think we can pinpoint any other aspect of our game as a team. Yes, the batting obviously has to be looked into. There's no running away from that. Having collapses every now and then is not a good thing. And that's something we need to analyse and correct, moving forward."

Apart from India’s bowling, Rishabh Pant’s Cape Town hundred was one of the big positives for India. Praising the youngster, Kohli said, “Definitely I think it was a high-quality knock given the conditions and the situation and the kind of bowling that was on display, and that's the talent he possesses. Tremendous knock, one of the better hundreds that I have seen.”