IPL 8 27th T20 KXIP vs SRH Live Scores, Preview: There will be no favourites when Kings XI Punjab and Sunrisers Hyderabad clash at Mohali on Monday.

There will be no favourites when Kings XI Punjab and Sunrisers Hyderabad clash at Mohali on Monday. Both teams are languishing at the bottom of the table. Also, they would be going into the match against each other having lost their previous encounters. While Punjab were terribly poor against Chennai Super Kings, their batting completely falling apart against a strong bowling outfit, Hyderabad went down to Mumbai, unable to chase what was nothing more than a mediocre target. Both teams would thus be keen to find their rhythm once again. 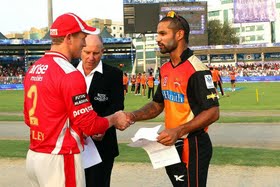 Punjab have struggled mainly because their star batting line-up hasn't performed to potential. They will need to get their act right if they want to succeed. Punjab would need significant contributions from the likes of Virender Sehwag, Shaun Marsh, Glenn Maxwell and David Miller. Most of them have made some noteworthy contributions at various stages of the tournament, but as a batting unit they have failed. Maxwell has been particularly disappointing, and he actually had to be dropped from last match against Chennai Super Kings to accommodate skipper George Bailey. The captain has been their most consistent batsman, but he too failed in the last match against Chennai.

Like their batting, Punjab's bowling has been a let down as well. They have been heavily reliant on Mitchell Johnson, but he just hasn't lived up to the expectations. In the last match against Chennai, he conceded plenty without claiming any wicket. Punjab would need him to be on top of his game against Sunrisers. The other pacers like Karanveer Singh, Anureet Singh and Sandeep Sharma also could not make much of an impression against Chennai. In the spin department as well, Akshar Patel has been disappointing. Punjab thus have a lot of improvements to make in the batting as well as bowling departments.

Sunrisers Hyderabad, on the other hand, have struggled due to their overreliance on skipper David Warner and his opening partner Shikhar Dhawan. Against Mumbai, Warner failed, and it led to Hyderabad's collapse, which is not a good sign for the team. Dhawan played a good knock, but even he hasn't been as impactful as Warner, which must disappoint Hyderabad. Lokesh Rahul has played a couple of good knocks, but there are still question marks over his value in a T20 squad. Unless Hyderabad manage to find players who can shine with the bat on days when Warner falls early, they will continue to struggle.

In spite of their loss against Mumbai, Sunrisers would be pleased with their bowling effort. Dale Steyn bowled very well, and he was nicely supported by the likes of Bhuvneshwar Kumar, Praveen Kumar, Karn Sharma and Trent Boult. It was the kind of effort they needed to find some rhythm in their campaign. But, their batting let them down again, and unless they stand up against Punjab, Sunrisers could struggle again.