Did you know? Former India captain Mahendra Singh Dhoni once lost his cool on Kuldeep Yadav after the latter did not pay heed to his instructions

Did you know? Former India captain Mahendra Singh Dhoni once lost his cool on Kuldeep Yadav after the latter did not pay heed to his instructions. The incident took place during the second T20 between India and Sri Lanka in Indore last year when Rohit Sharma was leading the team in the absence of Virat Kohli.

Revealing what happened on the show 'What the Duck', Yadav said, "Wherever I pitched the ball, it went for six. The ground was so small. After every six, I would look at Mahi. He would say, 'it wasn't that far, you should keep it further'.”

"And when I was bowling my fourth over; the batsman reverse swept me for four. Mahi bhai came to me and said, 'remove cover, move him deep and bring point up'," Yadav added. 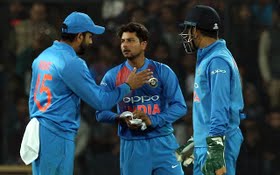 As it often happens, the move worked and Yadav picked up a wicket soon after.