Skipper Kane Williamson and Tom Latham hit half-centuries to lead New Zealand to 152 for one and frustrate India after a wicketless session to tea in the first Test on Friday.

New Zealand batsman put skillful performance to counter Indian spin duo to stand on top of the first Test match at Kanpur. They were lucky too at couple of moments but they should be credited a lot for the application they showed. A light drizzle had begun shortly before tea on day 2, but the break was taken as scheduled, with New Zealand 152 for 1 in 47 overs. With poor drainage system available at Green Park Stadium, the ground staff had to cover the whole group and rain suddenly got heavier. Match refree called off the play for the day at 3:45 PM local time. 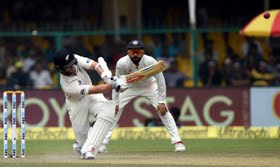 Untill then, it was a one sided affair with New Zealand batsmen playing smoothly and accumulating runs at will. Their unbroken 117-run stand meant New Zealand were only 166 behind India’s first-innings total of 318. India got so many mainly due to enterprising 42 runs off 44 balls from Jadeja who attacked bowlers right from start of the day's play. Jadeja’s innings meant India could add 29 runs to their overnight 291 for 9 before Neil Wagner got Yadav to glove a leg-side delivery to BJ Watling, ending India’s innings.

Umesh Yadav provided India their only breakthrough when Martin Guptill got too far across to quick and full delivery which rapped him on pads and going to hit middle. Williamson looked untroubled against both spinners especially against Ashwin. More often than not he decided to stay on backfoot and use the slowness of the track and manoeuver the balls in gap. On the other hand, Latham relied mostly on sweep shot. It was not a coincidence that most of the close calls came towards the end of the second session. The wearing pitch and Ashwin finding his length and loop played their part in creating more doubts for New Zealand. But, it was rain which has the last laugh and demolished the rest of the day's play.

Play has been abandoned on Day 2 in Kanpur. New Zealand to resume tomorrow at 152/1.

Latham and Williamson steadied the New Zealand reply after losing an early wicket as the visitors reached 152 for one at Tea.

New Zealand captailise on the start they got in the first session of the day's play. Both Latham and Williamson played spinners without taking too many risk and make sure that they won't lose any wicket in the post-lunch session. New Zealand scored 81 runs and they are trail now by 166 runs now. Latham used sweep shot to good effect and played almost at will. Latham continuing his good form what he had gained in Zimbabwe and brought his half century with sweep shot. He got a lucky escape when KL Rahul hold a catch at forward short leg but the ball just touched his helmet grill before he catched. On the other hand, Kane Williamson is doing for what he is known for. He completed his 23rd fifty and displayed brilliant batting show. At Tea, New Zealand were 152 for loss of one wicket. But the sad news for now is it started drizzling just after Tea break and whole ground is covered.

Tom Latham and Kane Williamson fought well against Indian spinners in first session of day 2 of First Test in Kanpur. The pair almost neutralize the Indian force by playing spin sensibly and accumulated the runs too at handsome rate.

Earlier, India began the days play at 291 for 9 and added 27 runs more to their tally to reach 318. Finally, Neil Wagner struck in the seventh over of the morning to get rid of Umesh Yadav.

New Zealand started their inning on positive note and they didn't miss any scoring opportunity. Both openers get on front foot to play drive which enforced Indian skipper to bring spin early in the inning. But this move too didn't worked for the home team as Guptill comfortably sweep Jadeja for four. Umesh Yadav provided the breakthrough for India when he struck Martin Guptill in front of stumps to be adjudged leg before for 21. India didn't enjoy any success after this as both on crease batsmen looked to play positive with long stride against spinners and looked to minimize spin. Kane Williamson has rotated the strike very well since he came and never allowed spinners to settle in. The pitch also looked best to bat in the first session of the day as it was also the case yesterday when Indian batsmen scored in excess of 100 in the first session.