Sourav Ganguly’s golden arm came to good use for his team Pune Warriors as they overcame a powerful batting line up of the Delhi Daredevils. Ganguly with his innocuous medium pace gave his team the crucial wickets of Kevin Pietersen and Irfan Pathan to change the fortunes of the game.

Delhi Daredevils had a fabulous partnership going between Skipper Virender Sehwag (57 from 32 balls with 5 fours and 4 sixes) and Kevin Pietersen (32 from 23 balls with a four and 3 sixes) which was broken by Sourav Ganguly. Sehwag was removed by Murali Kartik who took a great return catch as Daredevils slipped to 115 for 4 in 12.3 overs in the run chase. 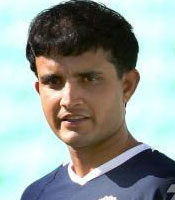 After removing the key batsmen, Pune Warriors was in total control of the situation. Ross Taylor was the only hope left for the hosts but he couldn’t do much as the task got too tough even for him. Daredevils in the end were restricted to 172 for 7. Alfonso Thomas was the most successful bowler for Pune Warriors taking 3 for 22 in 4 overs including the wickets of Mahela Jayawardene and Ross Taylor.

Interestingly the Man of the Match award went to Sourav Ganguly ahead of Jesse Ryder.

Pune Warriors look good to upset Delhi Daredevils after putting up a huge total of 192 for 3 at the Feroz Shah Kotla Stadium. Jesse Ryder once again controlled the game for Pune Warriors, this time scoring a superb 86 from 58 balls with 7 fours and 4 sixes.

Ryder got good support from Sourav Ganguly, who scored his best of this season – 41 from 35 balls with 5 fours and a six. Later on, Steven Smith helped Ryder with a quick cameo of 34* from 13 balls with 4 fours and 2 sixes. Morne Morkel took three wickets but went for as many as 50 runs in his 4 overs with some of them coming through fluke shots.

Toss and Teams: Hosts Delhi Daredevils have won the toss and asked Pune Warriors to bat first at the Feroz Shah Kotla Stadium. Ajit Agarkar has been left out and replaced with left arm spinner Pawan Negi by the Delhi Daredevils. On the other hand, Pune Warriors have brought in Alfonso Thomas in the place of Marlon Samuels.