Having been easily beaten in the first ODI at The Rose Bowl, Pakistan needed to do something significantly different to try and compete with the fiery English line-up. That wasn't to be the case though as the Lord's match was more a sense of déjà vu than anything else.

Having been easily beaten in the first ODI at The Rose Bowl, Pakistan needed to do something significantly different to try and compete with the fiery English line-up. That wasn't to be the case though as the Lord's match was more a sense of déjà vu than anything else. They did change up things a bit, but the eventual result was still not to their liking. The batting let them down again, as it was a failure. For England, it was a case of all too easy. The four-wicket victory may suggest a closer contest, but it was more deceptive than anything else.

It wouldn't be wrong to say that the match was all but decided within the first four overs of the day's play. Pakistan made the brave decision of batting first on a surface responsive to bowlers early on, and it hit them very hard. The visitors made the right move by bringing in Sami Aslam for the struggling Mohammad Hafeez. The intent was there, but they were just not good enough to execute their plans under tough circumstances. As a result, Pakistan found themselves in all sorts of strife very early in the piece. Aslam, Sharjeel Khan and skipper Azhar Ali were gone in a flash.

To their credit, Pakistan fought back well from a precarious situation to cross the 250 mark. In recent times, Sarfaraz Ahmed has been one of the few positives for Pakistan in the one-day format. He once again displayed his versatility in the format, playing according to the situation and registering a high-quality hundred. It was thanks to the wicket-keeper batsman that Pakistan had something to bowl at. He got excellent support from Imad Wasim, who contributed a crucial half-century. But, Pakistan were also hurt by the fact that two of their middle order batsmen got starts but did not carry on -- Shoaib Malik and Babar Azam.

For England, it was a simple case of playing up to their potential. The result took care of itself. The pace bowling duo of Mark Wood and Chris Woakes were once again up to the mark. They bowled with fire, were at the batsmen throughout, and were rewarded with important wickets as well. Liam Plunkett continued to go a good job using his height and experience. The spinners do need to show some improvements though. Adil Rashid and Moeen Ali haven't made much of an impact. And on days when one of the pace bowlers have an off day, it could hurt England. 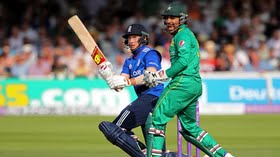 The positives for England continued to flow in the batting department. Joe Root carried on with his mighty impressive run, leading the chase for his team. He just did not look in any kind of trouble, so it was a missed opportunity of sorts as he missed out on a hundred offered to him on a platter by Pakistan's bowlers. Eoin Morgan also impressed, coming up with a much-needed half-century as England cruised even further. If anything, the continued struggles of opener Alex Hales will further trouble them. Take that out, and there isn't a lot ailing England at present.