India defeated Bangladesh by 109 runs at the Melbourne Cricket Ground (MCG) on Thursday to progress to the semi-finals of the ICC Cricket World Cup 2015.Here’s a look at some important numbers related to the match.

India defeated Bangladesh by 109 runs at the Melbourne Cricket Ground (MCG) on Thursday to progress to the semi-finals of the ICC Cricket World Cup 2015.Here’s a look at some important numbers related to the match.

The win at Melbourne was MS Dhoni’s 100 as one-day captain. Only two other international captains have won more than 100 matches as ODI captain, and both of them are from Australia – Ricky Ponting and Allan Border.

The victory was India’s 11th in the row in the World Cup. They have now won seven games in a row in the current edition, to go with their four consecutive triumphs in their last four matches of the 2011 World Cup. 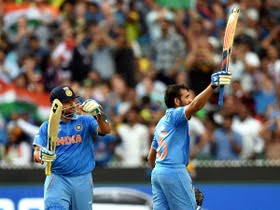 India have now bowled out their opponents in seven consecutive games. This is a record in the World Cup. South Africa had bowled out teams six times in a row in 2011.

Mohammed Shami’s two wickets in the game have taken in past Australia’s Mitchell Starc as the leading wicket-taker in the 2015 World Cup for now. Shami is on 17 while Starc has 16 scalps to his name.

Rohit Sharma’s hundred was his second at the MCG. He had scored one against Australia in the opening match of the tri-series held before the World Cup. David Gower and Vivian Richards are the only two visiting batsmen to have scored two ODI tons at the venue.

While Rohit and Suresh Raina maintained a strike rate of over 100 during their respective knocks, a few others struggled to rotate the strike. Shikhar Dhawan faced 50 balls for his 30 while Ajinkya Rahane managed only 19 from 37 balls.

Ravindra Jadeja, who had not been among the runs, came up with a scintillating cameo. He faced only 10 balls, and hit 4 fours to remain unbeaten on 23, at a strike rate of 230.

Both Mashrafe Mortaza and Taskin Ahmed conceded the same number of runs for Bangladesh – 69. While Ahmed finished with three wickets, Mortaza managed only one.

Not a single Bangladesh batsman managed to cross the half-century mark in the match. Nasir Hossain was the top scorer with 35 while four batsmen Tamim Iqbal, Soumya Sarkar, Mahmudullah and Mushfiqur Rahim were dismissed in the 20s.

The Indian pacers again combined to claim a majority of the wickets. Umesh Yadav claimed four, Shami two and Mohit Sharma one as the trio finished with seven wickets.

Not a single Indian bowler conceded six runs an over. Jadeja was the most expensive with 5.25 while Ravichandran Ashwin was the most economical with 3.0.

No team has ever won chasing 300 plus at the MCG. India’s bowlers ensured that the record stayed.